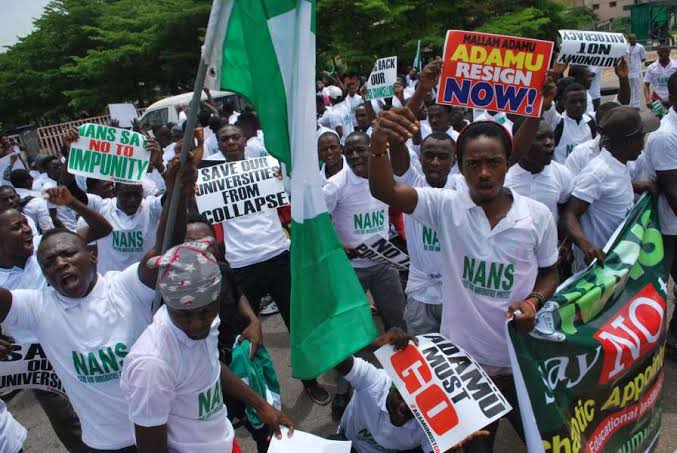 Mouthpiece NGR reports that the National Association of Nigerian Students has declared that no political party will hold a convention to select any presidential candidate in Abuja.

NANS President, Sunday Asefon, made this known on sunday in a statement obtained by our correspondent.

Recalls that the Peoples Democratic Party had picked the Federal Capital Territory for its May Convention to select its presidential candidate amid 15 aspirants from all over the country.

The ruling All Progressives Congress is also understood to have considered Abuja for its presidential primary later this month.

However, NANS, in its statement, told the political parties to either end the strike embarked upon by the Academic Staff Union of Universities since February 14, 2022, or forget about holding any presidential primary in the nation’s capital.

The apex students’ union body also expressed anger that those saddled to ensure the smooth running of the education sector including Minister of State for Education, Emeka Nwajiuba; and Minister of Labour and Employment, Chris Ngige; have picked up the outrageous N100m presidential forms of the ruling APC.

In the statement titled, ‘End ASUU Strike Or Forget Political Activities In Abuja’, the NANS president said, “We have also in the past weeks seen those saddled with great responsibility in the education sector and those saddled with responsibilities of resolving labour crises declaring interest to contest for the seat of the President come 2023.

“We are surprised by their effrontery and total disrespect to the Nigerian people for having the courage to even mute the idea of contesting talkless of picking up the 100million naira presidential form while students languish at home because of their collective failures.

“Politicians have shown no concern to the plight of the students but are only busy in their selfish and inordinate ambitions to become the next President.

“Let me say without mincing words, the two major political parties should forget any political gathering in Abuja who elsewhere except there is a solution to the lingering ASUU strike.

“We will frustrate all the activities leading to the selection of party candidates if we remain on strike.

We also want to advise the government and the politicians who are busy campaigning to be President to either resolve the ASUU crises or give direct orders to the security operative to shoot us at the site during party conventions to select a presidential candidate. If we remain on strike, they should just forget it.”

ASUU, on March 14, at the expiration of its four-week warning strike which it declared on Monday, February 14, had extended the industrial action by two months.

The union led by Professor Emmanuel Osodeke said it made the decision to extend the strike so as to give the Federal Government and its agencies enough time to meet the lingering demands of the union.

The union had embarked on a nine-month strike in 2020 before it was called off in December of that year.