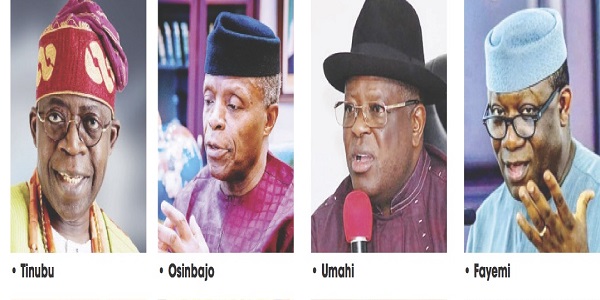 Eleven aspirants yesterday obtained the All Progressives Congress (APC) presidential nomination form, raising the list of applicants so far to 17.

The number will grow with some of those who have indicated interest yet to come forward.

The others, including Vice President Yemi Osinbajo were represented.

National Organising Secretary of the ruling party, Alhaji Sulaiman Arugugu, told The Nation that 241 aspirants have picked senatorial forms, while 821 aspirants have purchased the forms for House of Representatives and 1,505 aspirants are jostling for the 36 states House of Assembly tickets as at yesterday.

Collection of form will close on Tuesday.

The electoral commission warned the political parties yesterday that it would only recognise candidates that will emerge from valid primaries.

Addressing reporters after obtaining his nomination form, Pastor Bakare said he would rebuild the country through a four-point agenda of “peace, prosperity and progress and possibilities”.

“Our programme is very simple: peace, prosperity and progress and possibilities. Upon those four pillars, Nigeria will be rebuilt and the hope of many citizens will be rekindled.

Asked if the multiplicity of aspirants from the South will not affect the clamour for power shift to the region, Bakare said the country needed “the best, the fittest and the most competent” as the flag bearer.

“Many people run in a race, but only one person will wear the crown. There is only one seat. Whoever wins, the rest of us must rise to support him to rebuild Nigeria. East, West, North or South, Nigeria is our country.

The Chairman of The Progressive Project (TPP), the umbrella body of support groups for Prof. Osinbajo aspiration, Senator Kabiru Gaya, advised the party to stick to the zoning and rotation.

The Senate Committee Chairman of the Independent National Electoral Commission (INEC) argued that politics “is a game of give and take”.

Gaya said: “I’ve been in politics for many years and given my understanding of how it should be played, I believe it is a game of give and take. We (North) have served as the president in this country for eight years under the leadership of President Muhammadu Buhari. Therefore, the presidency should go to the South.”

Gaya said the decision on the mode of primary should be left to the leadership of the party.

Former Ogun State Governor Ibikunle Amosun publicly declared his intention to run for president on the platform of the All Progressives Congress (APC) yesterday.

Making the declaration in Abuja, Amosun said his experience in public office as a senator and governor would be added advantages if given the chance.

He said: “My wide range experience in both the private and public sectors in political parties and political alliances in two of the three branches of government, that is the legislative and executive arm, and also at every level of government have given me the requisite insights and political vision and deep understanding and strength of Nigeria’s diversity, adequate to provide the needed leadership that will galvanise our country to achieve our manifest destiny as the leading nation, not only in Africa but also in the black world.”

“Today, I’m formally announcing my candidacy for the presidential ticket of our great party, the All Progressives Congress and the presidency of the Federal Republic of Nigeria.