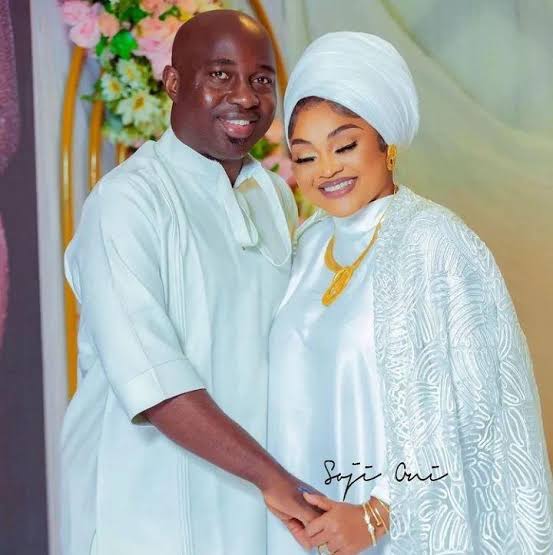 The revelation was made on Sunday, January 23, 2022 when she January 23, When she shared a photo of herself with her ‘boo’, Kazim Adeoti, wishing him happy birthday in advance.

The actress further revealed that their marriage took place in December of 2021 without any fanfare.

Interestingly, the former husband, Lanre Gentry also remarried last year in September. Unlike his former wife’s marriage, Lanre Genre made a meal of his on social media.

Lanre and Mercy parted ways after a 7-year tumultuous union, oftentimes leading to violence and public dramas. While Mercy accused Lanre of domestic violence, Lanre accused the actress of infidelity.

In reaction to Mercy Aigbe’s marriage, the former husband posted a picture of himself, the actress and the new husband of the actress, to tell the world the man the actress just married used to be his friend.

“At last I thank God the truth is out. This is just one out of many. Glory be to God,” he wrote.

The development has continued to generate mixed reactions on social media. Minutes after she shared the post, some of her followers called her out for marrying Adeoti, claiming that he already has a wife. Others supported her stating that Adeoti is a muslim so can marry more than one wife.

Mercy’s ex husband who she shares two children with has since reacted to the news. Taking to his Instagram page, Lanre Gentry shared a throw back photo of him and Mercy with Adeoti at an event, stating that the ‘truth is out at last’

”At last I thank God the truth is out this is just one out of many to God be the glory. I don’t need anyone’s comment please.” he wrote