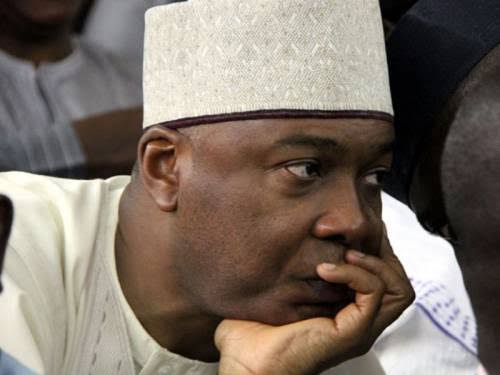 A group within Osun State Chapter of the Peoples Democratic Party has attacked the former Senate President, Bukola Saraki and the new National Legal Adviser of the party, Barrister Kamaldeen Ajibade, SAN of being the brain behind the unending logjam in Osun State Chapter, for his personal business.

In a statement obtained by Mouthpiece NGR on Monday, Saraki was accused among other things of working against the party by trying to force the congress of a factional group loyal to Senator Ademola Adeleke identified as The Pathfinder Group and led by the State Publicity Secretary of the party, Hon. Sunday Bisi on that of the entire State Executives and against the rule of law.

It read: “The former senate president has been accused of active involvements in the efforts to force the illegal factional Ward Congress of the Pathfinder group conducted under Hon Sunday Bisi on the National Working Committee led by Senator Iyorchia Ayu through his boy, the new National Legal Adviser, Barrister Kamaldeen Ajibade SAN, after failing to force the administration of Prince Uche Secondus to give that factional group the Bukola Saraki’s proposed undue recognition.”

“Osun PDP wants to put it on record before the NWC led by Senator Ayu that under the extant laws of the party only the elected State Chairman and Executives that came into being upon their inauguration on March 25, 2018 which tenure are guaranteed and certain for 4 years will expire on March 25, 2022 that has the constitutional powers and legal right/backing  to conduct the Ward Congress and 3 Ad-Hoc delegates which they duly conducted on September 25 & 27 , 2021. We therefore advise that no other faction should be given any recognition unless we want to destroy the party completely and allow the ruling party, the APC to continue to strive in their failure of governornance of the country.”

“Barrister Kamaldeen Ajibade, SAN who also doubles as the National Legal Adviser was accused of meddling in the affairs of Osun State Chapter by personally coming to Osun and file court processes in a case that judgment has been delivered without recourse to other National Working Committee Members of the party.”

“Barrister Kamaldeen Ajibade’s unholy acts is already painting the Iyorchia Ayu-led NWC in bad light with his  wrong legal advice that will perpetually put the party in court against stakeholders from all other troubled states just for him to be making millions of Naira as Legal Consultant to the counsels he will be employing for the party.”

“It will be unfair to Osun people for him to be sitting at meetings where our matters and serious issues will be discussed, so also it will be wrong to have Senator Bukola Saraki wherever Osun PDP matters will be discussed because we are convinced that he will also use our matter to promote his business interests and nothing more.”

“Kamaldeen Ajibade, SAN, will defend whatever he thinks will let him have his share of the profit percentage the way his predecessor, Emmanuel Enoidem did before their inglorious exit.  We must not forget in a hurry that Barr. Enoidem always wrote  letters to sponsors of various crises in different states.”

“He was the one that advised the NWC to dissolve the party executives shortly before the Anambra  governorship election and the outcome is know to all of us.”

“Barrister Kamaldeen Ajibade has begun the same dangerous trend as reflected in his recent action when he rushed to Ile-Ife, Osun State to personally file several applications in an High Court case where Judgment has been delivered without consultation with NWC or any of its members but acted on the instructions of Dr. Bukola Saraki and Dr. Deji Adeleke.”

“At this juncture, one would pause and ask the pertinent question “what’s the personal interest of Barrister Kamaldeen Ajibade SAN that made him rush to Osun to personally file court processes on behalf of the party without instructions from the NWC or the National Chairman of the party, Senator Iyorchia Ayu.”

“This and many other actions of the National Legal Adviser, Barrister Kamaldeen Ajibade SAN is not only suspicious but it also portrays him as someone who is out to use the PDP for business with intent to enrich himself and also to satisfy his two paymasters at the detriment of the Party rather than pursuing political solutions for amicable settlement of the leadership crisis in Osun State.”

“Saraki has been accused of creating logjams in Osun State since 2018 governorship election, deliberately creating frictions between aggrieved leaders of the party instead of using his position then as Senate President and as the Campaign Council boss later to mediate between warring factions in the state.”

“It is also on record that Senator Bukola Saraki breached the agreement reached in his house in 2018 between Senator Ademola Adeleke and Dr. Akin Ogunbiyi because Dr. Deji Adeleke who claimed he is not a card carrying member of our party dictated to him what he wanted and that partly cost us to have a landslide victory in that election.”

“Otunba Christopher Iyiola Omisore is alive today and he can testify to how Saraki ignored the well laid out political arrangements and agreements reached with him and PDP leaders in 2018 to support PDP during the re-run of the governorship election of 27 September, 2018, he treated Senator Omisore with disdain, like someone they didn’t need, hence the defeat at the end of the exercise.”

“In 2019, Senator Bukola Saraki, it will be recalled was the PDP Presidential Campaign Council Chairman and he didn’t deem it fit to pay us a visit for once throughout the duration of the presidential campaign, his action and lackadaisical attitude towards Osun definitely contributed to the failure of PDP losing the presidential election with about 10,000 votes in 2019.”

“The date he fixed to come to Osun was was the day he used to visit Oju-Ode Oba ceremony in Ijebu-Ode and Saraki was seen on television and social media platforms, busy dancing to Azonto music while Osun leaders were waiting in vain to receive him, not even an ordinary apology letter was sent to them. The National Reconciliation and Strategy Committee therefore failed woefully in its assignment, as far as Osun PDP matter is concerned.”

“Another reason that has been adduced for the allegations of deliberate efforts to scuttle the peace process in Osun by Senator Bukola Saraki include how he deceived the warring factions in 2020 with a reconciliation meeting which he kept postponing. It will be recalled that when Senator Bukola Saraki was saddled with the responsibility of heading the National Reconciliation and Strategy Committee of PDP, he deliberately skipped visiting Osun state throughout his tenure as the Chairman of that committee because his friend, Dr. Adedeji Adeleke told him not to come.”

“At the peak of the crisis and when it was becoming too obvious that Saraki wouldn’t come to Osun, all the leaders of the party from both factions took Osun matter to the NWC and they had to force Sen. Bukola Saraki-led National Reconciliation and Strategy Committee in Abuja to attend to the leaders of both factions, which he reluctantly met at Legacy House in Abuja but till today Senator Bukola Saraki sat on the outcome of that meeting and he kept on manipulating the fortune of Osun PDP in favour of the Adeleke family. Some of his committee members expressed disgust at his manipulative tendencies towards Osun state Chapter of the party for keeping the report of that meeting to himself.”

“It is all over Osun Social media and the Adeleke boys are boasting all over the platforms that Dr. Deji Adeleke has settled the National Chairman, Senator Iyorchia Ayu with the latest SUV and $200,000 during his inauguration into office, so also are all members of the NWC who have be given packages in US dollars. We don’t want to believe their allegations but the actions of the National Chairman and members of the NWC will surely prove otherwise.”

Senator Bukola Saraki should face the problems he created for PDP in Kwara and leave us alone in Osun State. He should not use his ambition and personal interest to scuttle the gradual peace process that is ongoing in Osun state.