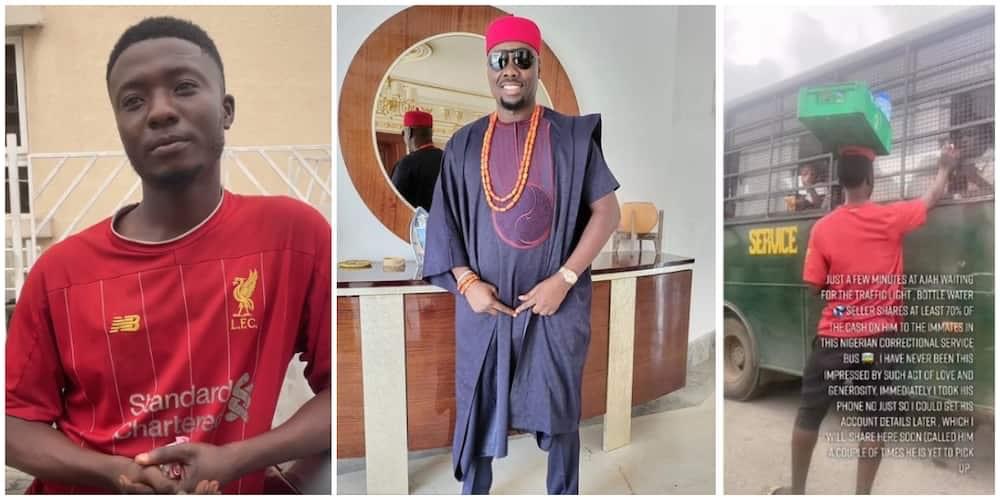 Mouthpiece NGR reports that a popular social media user, Obi Cubana has offered job to Lagos hawker in any of his companies and scholarship.

The life of Ekuma Jeremiah is set to change for good as the Nigerian business man announced in a viral video that he would give him a lifetime opportunity.

The socialite also offered Emeka employment in any of his companies, stating that he expects nothing in return

Emeka Jeremiah, the young hawker who went viral days ago for his kind gesture to inmates has a reason to smile and may never hawk again as Nigerian businessman has offered him university scholarship and employment.

The bottled water hawker had become an internet sensation after a video of him sharing his money to inmates in a correctional service vehicle in Ajah, Lagos went viral.

That singular act saw the young man receive financial donations running into thousands that his bank had to flag his student account.

And yet, fortune has not just smiled on him but offered a hug this time with Obi Cubana’s offer.

In a recent Instagram live interview with media personality Daddy Freeze, the 46-year-old socialite stated that the offer is a lifetime one and doesn’t expect anything in return for his gesture to the young man.

“I am offering him a lifetime opportunity, he has to go to school I think that is his ambition.

“I will see him through the university and if he wants to do Masters abroad , I will make sure he is comfortable while going to school because like I said earlier, that is the best we can do for him.

“…He will do University, anything he wants and then by God’s grace I know I will still be standing by the time he is done with school, he has a place in any of my organisations at the top level and if by God’s grace he finds a higher calling, you see there is nothing tied to this, I do not expect anything in return.”