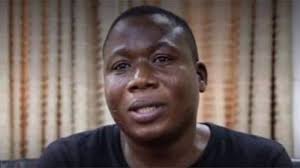 In a statement on Tuesday evening by his spokesman, Olayomi Koiki said his principal is in urgent need of medical attention over his health problems.

According to the statement, “After speaking with his legal representatives, I would like to confirm that his health needs urgent attention and we are using this medium to plead with the Government of Benin Republic, President Patrice Talon to please allow Chief Sunday Adeyemo aka igboho to seek medical treatment due to his health.

“He needs urgent medical treatment and giving him this would help him with his health problems.

We know you are just a man and one that wants progress for his country too. We have seen all the wonderful things you have done to bring good change to your country.

“President Patrice Talon please we need your intervention to enable his quick release because his health needs urgent attention and we know that this would be granted to him, because we don’t want anything to happen to him while in the custody of your country.

“Chief Sunday Adeyemo have been held in Benin since 20th of July 2021 and now his health have been affected badly. We would like to say thank you in anticipation.

“Also we would like to use this medium to appreciate his lawyers and everyone that have stood by him during this very difficult time.”