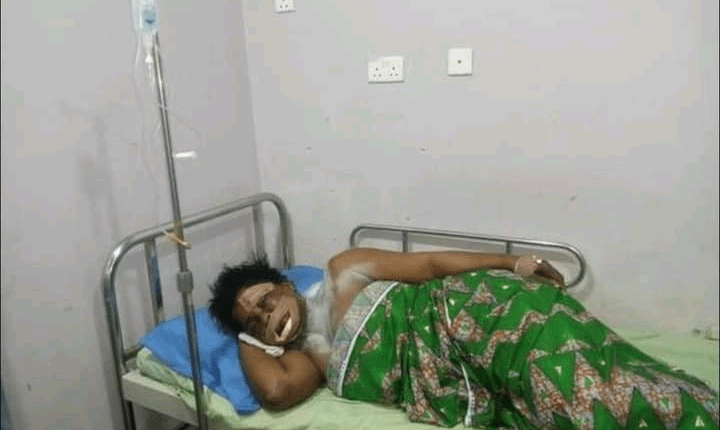 One Emma Ereegarnoma, a suspected Yahoo boy, has been arrested for allegedly trying to use his birth mother for ritual.

The young man tried to pluck out his mother’s eyes in his residence in Delta State, Mouthpiece NGR has learnt.

The suspect carried out the money ritual act on Tuesday September 14 at his residence in Okuokoko town in Okpe Local government area of Delta state, in a bid to buy a Mercedes Benz.

It was gathered that he invited his petty trader mother to his home for a surprise, and she was excited when she came in and heard a loud music playing from his home theatre.

After welcoming her, he locked the door, started strangling her and attempted to pluck out her eyes. As the loud music submerged her cries for help, she was able to break free and ran out to neighbors who rescued her.

Emma was thereafter apprehended and handed over to the police.

The suspect who earlier bragged about buying a Benz GLK this week, is now being detained at Orerokpe police station while his mother receives medical care at a hospital in Okuokoko.

It was Jubilant Gallor in Okuokoko town, okpe Lga .filled with crowd to witness how A Boy who want to use mum for Ritual was caught

Mrs oke Ereeganoma who is from Odorubo in ughelli North Lga but Reside in okuokoko ,Who also Sell food stuff at okuokoko market beside okuokoko police station survived Ritualist Attack by her Son.

She narrated the story that for some days now d son has been Boasting that he must Drive GLK this week, So on Tue at about 8pm the son invited her to his house at Caroline street okuokoko that he had surprise for her . On Getting there she saw the son in joyous mood with loud music, then after the son Lock the door and was trying to strangle her to death by trying to pluck off her Eyes, she started screaming for help but due to the loudness of the music there was no Respond,

but strength came upon her and she ran outside for help and neighbours came for her Rescue and d son was caught and has been taken to Orerokpe police station.

Currently Mrs Oke is receiving treatment in an Hospital in okuokoko.