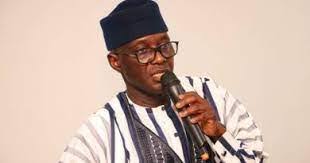 The Senior Special Assistant on Liaison to Engr. Abdullahia Sule Hon. Yusuf Jibrin Maianguwa has said the visit of the British High Commissioner to Nasarawa was timely and a step to the right direction.

Maianguwa disclosed this in an interview with reporters in his office at the Nasarawa Liaison Office, Abuja, commending the British government for strengthening relationship between their government and Nasarawa state.

He said the main reason for engaging the British high commissioner, Catriona Laing is to further drive the initiative of the Engr. Abdullahi Sule to the international community especially in the area of education and agricultulture.

Recall that the British high commissioner, Catriona Laing had commended the SSA for persuading them with a very good presentation on the need to partner with Nasarawa state in terms of infrastructural and all round development in the state.

In her word ” I am opportuned to be here this morning as a result of a opportunitic meeting I had with your special adviser, Yusuf. He did a very good approach on why I should be a guest to His Excellency, the governor of Nasarawa State.” She extols

To reconcile with the plan of the Nasarawa government concerning education, Yusuf said it was the driving force the propelled him to convince the commissioner to assist his administration because of their vast experience so as to strengthened the both sectors in the state.

The SSA also explained that the Abdullahi sule administration had invested massively in education in committing 26- 31 percents of its 202 and 2021 budget respectively to the education sector in compliance with UNESCO’ s recognition.
He further said the governor had formalized the appointments of the two thousand, two hundred and fifty (2,250) teachers who were engaged by the previous administration.

In agriculture, Hon yusuf said it is one of the area that the British government emphasized on bringing their experts into the state to partner with the state government to make the sector proactive as the country is gradually moving from depending on oil to agriculture.

” yes as you can see the country and the world is gradually moving from oil production to other means of development to enhance diversification of natural resources.”

“I want to assure you that the British government would implement everything they had promised the state concerning agriculture. “

Recall that the Governor of Nasarawa state had said “The major part of our agenda is to encourage commercial agriculture in our areas of comparative advantage and boost value addition to our crops by laying a solid foundation for agro-allied industries. To this end, Government will work with interested investors to drive the sector to diverse levels of growth.

Recall that the British High commissioner Catriona Laing had visited Nasarawa state and said the British Governor would partner with the Nasarawa state government to improve both the education and agricultural sectors in the state.