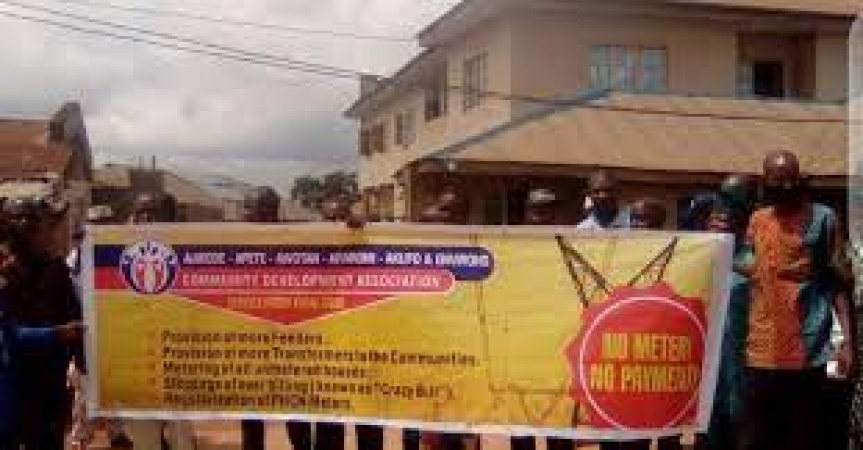 Residents of communities in Ibadan, the Oyo State capital, on Saturday, launched a “No Meter, No Payment” campaign against the Ibadan Electricity Distribution Company (IBEDC), Mouthpiece NGR gathered.

The campaign was flagged off with a peaceful protest, which began at Awotan Junction at the weekend and the protesters carried digital banners with various inscriptions on the campaign and went to some streets.

The residents noted that they will not pay money to any official of Ibadan Electricity Distribution Company (IBEDC) unless they were metered.

They insisted that they will not welcome any official of the electricity distribution company who comes to their houses without being given prepaid meters.

The protesters, who vowed not to pay monthly electricity bills until they were given prepaid meters, said the IBEDC officials have been bringing estimated bills to them, which they described as ‘crazy bills’ and they made case for its stoppage.

They called for the regularisation of PHCN meters to make life more meaningful to them, adding that they wanted more feeders and transformers for the communities, as well as metering of all unmetered houses.

Chairman of Ajibode, Apete, Awotan, Araromi, Akufo and Environs, Community Development Association, Rasak Fabayo, said: “We are here to launch a “No Meter, No Payment” campaign. We are paying for what we are not using.

“On behalf of residents of Apete, Awotan, Araromi Akufo, Laniba, Ajibode, we are launching this campaign. If any IBEDC official comes to your house, and they demand money, tell them that no meter is no payment,” they said.

IBEDC Media Relations Officer Busolami Tunwase said all customers without meters are being metered under the National Mass Metering Programme (NMMP) scheme, adding that meters that have been outlawed by NERC “cannot be absorbed into our network.

“So far, we have metered over 80,000 customers under the scheme for free. And we shall continue to meter customers as FGN releases more meters. In the meantime, all customers without meters are billed based on the approved capping policy by Nigerian Electricity Regulatory Commission (NERC), which means that they can’t be billed arbitrarily,” Tunwase said.