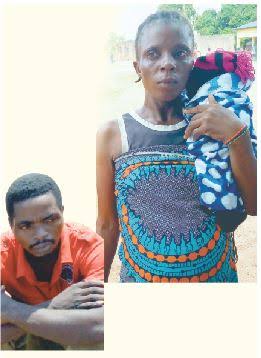 It was a dramatic moment at Agwa Tashi community, Obi Local Government Area, Nasarawa State on Monday as a couple, Mr Thomas Agba and his wife Mary, were arrested by a combination of some vigilante group members and a few elders of the community for stealing a new born baby belonging to a mad woman.

The couple, who before now were resident in Akwanga Local Government Area of Nasarawa State, had been married for 16 years without an issue. Their relationship had begun when Thomas, an indigene of Kokona LGA, met Mary, who hails from Wamba Local Government Area, and proposed marriage to her. They agreed to get married after a courtship that lasted about six months.

Speaking in an exclusive interview with our correspondent, Mary said: “Before I got married 16 years ago, my husband and I never made love.

“He was the first to suggest that we should not have sex until he paid my dowry. He always told me that we should wait until we got married. Unfortunately, I never knew that he was avoiding sex because he was impotent.

“Since we got married, he has not been doing his job as a husband and that always made me sad.

“Each time I confronted him with sex issues, he would either say he was not in the mood or ask that we should adjourn the matter till the next day.

“For 16 years, he kept giving me one excuse or the other, so we never had sex.

“Barely a year after our marriage, I discovered that he was an impotent man. There is no complete man on earth who will spend one year with a woman on the same bed without sex, more so your own wife.

“Many times I tried to seduce him by giving him the best of romantic kisses and wearing sexy clothes at night just to entice him, but his manhood would not stand at all.

“To make matters worse, he has never asked me for sex since we got married.

“I was depressed by the situation, so almost every night, I cried and cried because I didn’t know what to do.

“Right inside me, I also know that I don’t have a womb to conceive a baby even if my husband was a man. But the truth is that I love him so much and I did not want to commit adultery or cheat on him.”

Mary added that since her womb got damaged, it was clear to her that she would have a problem with child bearing when she got married.

She said: “Whenever a new couple gets married and later gives birth, I feel happy for them. But when I realise that I will never have the same experience, tears roll down my cheeks. The joy of every family is to bear children.

“Sometime late last year, I woke up early in the morning and summoned courage to tell my husband the truth. I told him to his face that he is an impotent man and there is no way he can impregnate me for us to bear children.

“He admitted it, telling me that he grew up to discover that he was impotent. I also seized the chance to tell him that I also cannot bear a child because my womb is damaged.

“I told him that even if he was man enough, it would be impossible for me to take in. I them suggested that there were two options open to us since we were both tired of people asking why pregnancy had not come.

“I suggested that we should adopt a baby and move to another location to give the impression that it is our biological baby.

“On a second thought, I remembered that there was a mad pregnant woman around our area, so I decided that we should monitor her, draw her close to us and take her baby as soon as she was delivered of it instead of going through the long process of adopting a child in Abuja.

“We both agreed to the idea and I started drawing

the mad woman close to me by providing for her needs and somehow she became used to me.

“She hardly spoke, but due to my closeness to her because of the food I was giving her, she managed to tell me how she was impregnated by a man whose location she could not really say.

“She also said that she was expected to give birth in July, although she ended up delivering in September.

“She went into labour in the night on September 7. Around that time, she was always in our compound, because I was providing for her necessities and our house was not far from the main road.

“We immediately rushed her to the hospital and after about five hours of labour, she was delivered of a baby boy. We spent two days in the hospital to normalise her.

“While we were in the hospital, I sold the idea of snatching the baby from the mad woman to my husband and change our base from Akwanga to  Lafia.

“When she was discharged from the hospital, with my husband’s car, we left the hospital in Akwanga, drove straight to Lafia and headed straight to Awe LGA where we arranged for a friend who is a medical personel to give her some injection to calm down her breast milk.

“We dumped her somewhere in Awe LG and returned to Agwa Tashi in Obi LG with the baby.

“The mad woman’s deficiency, which we took advantage of, is that she hardly talks. She prefers to talk alone than to talk to people.

“I had already bought baby food and feeding bottle and prepared hot water in case he would start crying on the road.

“So we abandoned the mad woman in Awe and relocated to Obi to settle there temporarily. Our intention was to move back to Lafia after one year and settle there permanently.

“My husband is a businessman.”

Our correspondent gathered that while many people around Akwanga had noticed the sudden disappearance of the mad woman, none felt any need to probe into her case.

Mary said: “One week after, the new born baby was not feeling so strong, so we took him to Dalhatu Araf Specialist Hospital for treatment.

“As we were trying to locate the children ward, we did not know that a former neighbour of ours in Akwanga was involved in an accident and was admitted at the hospital.

“His wife saw us with a baby and was visibly shocked. From that moment, she knew that we must have snatched the mad woman’s baby, more so because she knew that the mad woman was close to us and her whereabouts had become a source of concern.

“She quickly returned home and informed a few other people who later told some members of the vigilante group about our new location.”

Mary, who pleaded with the team not to thank her over to law enforcement agents, said she could not bear any child because her womb was damaged by a quack doctor during an abortion she had as secondary school pupil, adding that she did what she did out of frustration.

She said: “When I met Thomas about16 years ago, he loved me so much and I equally loved him. So, when he proposed marriage to me, I quickly obliged and could not tell the truth because I didn’t want to lose him.”

Also speaking, Thomas, who also pleaded that security agents should not be involved in the matter, admitted that he was impotent, adding that desperation to have a child led him to accept his wife’s proposal.

He said that they both have themselves to blame for not being sincere about their conditions from the outset.

He said: “We both lied to each other and it landed us in this mess. Please and please, you people should have mercy, pity our condition and look at our case. It was desperation to have a child that led us into this evil plan.”

The couple has since led some members of the vigilante group to Awe in search of the mad woman.

The matter was yet to be reported to the police at press time as the vigilante men insist on finding the mad woman before involving the police in it.