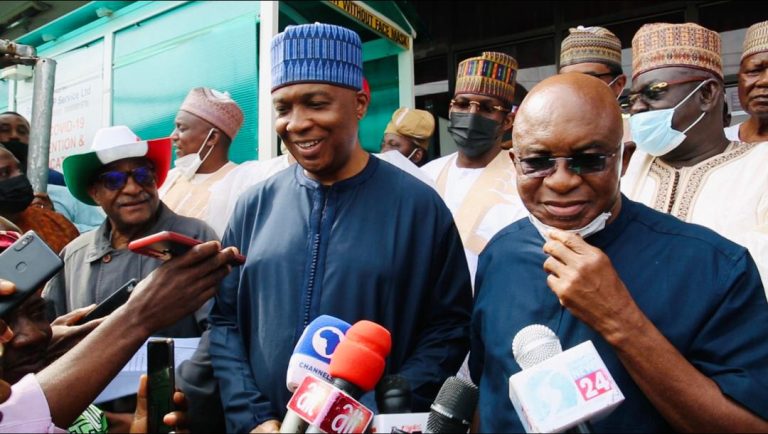 Mouthpiece NGR reports that the Board of Trustees (BoT) of the Peoples Democratic Party (PDP) has put in place measures to address the internal crisis rocking the party.

The representatives of the BoT spoke to newsmen in Abuja on Thursday after the crucial meeting held behind closed doors by the party leaders.

The meeting was summoned in the wake of defections from the party as well as the recent leadership crisis touching on the National Chairman position occupied by Prince Uche Secondus.

Following the meeting, former Senate Presidents Bukola Saraki and David Mark were delegated to address the press and the public on the outcome of the meeting.

“We resolved in the meeting to set up a committee to look at the situation,” Mark said.

“They (committee) will holistically look at the problems within PDP. It will not only stop the current crisis, it will provide a better environment to make us far more united, to make us stronger as a party.”

Mark also clarified that Rivers State Governor, Nyesom Wikerightfully attended Thursday’s meeting as a member of the BoT and was not summoned.

Buttressing the position stated by Mark, Bukola Saraki also assured that the matters affecting the party are receiving urgent attention and will all be addressed by the committee.

He said: “There is urgency on the matter. We all came together and we have agreed to set up this committee,” he said.

“Within the next 48 to 72 hours, they will meet, and at the end of that meeting, the country will see the direction in which the party is going. We know the importance of this party to the nation in addressing the challenges ahead of us.”