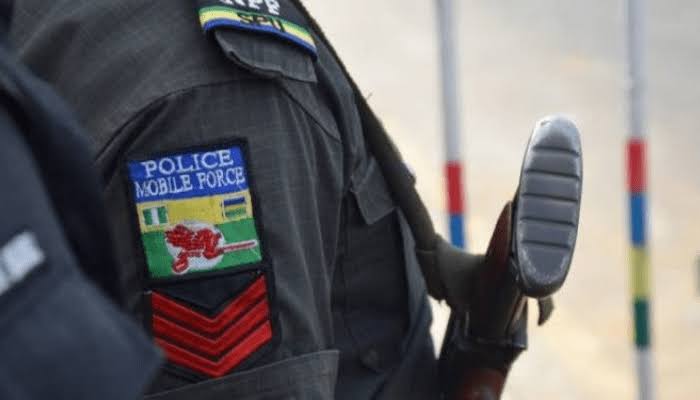 About 40 policemen reportedly stormed Ajaawa, the headquarters of Ogo- Oluwa local government on Saturday to effect the arrest of some community leaders including Alajaawa of Ajaawa, Oba Thompson Adeyeye Oyetunji and the executive chairman of the council, Mr. Seun Ojo.

The alleged invasion, Mouthpiece NGR learnt, were said to be orchestrated by one Prince Ade Master in retaliation of recent incident that got his properties destroyed.

Two cars, five motorcycles and other valuables were also burnt following the death of a 40-year old man, Oluwajubee who was hit by stray bullet of security officers allegedly attached to Prince Oyekunle Ade Master in July 10, 2021.

Oyekunle Ade Master and his family members fled the town to avoid being attacked by angry residents who accused him of being the brain behind all the criminal acts in the town.

On Saturday, the unrest situation took other dimension as 40 policemen from Abuja reportedly invaded the town with sporadic gun shot to scare people.

Mouthpiece NGR gathered that the policemen who were heavily armed destroyed properties and whisked away the secretary to Alajaawa and the house gatekeeper of the council boss.

It was learnt that the policemen were led by the embattled Prince Ade Master, whose residence, hotel and other properties including a shrine were razed by angry youths over allegation that security operatives attached to him shot dead a protesting youth in the community.

According to an eyewitness, when the policemen got to the Oba’s palace in Ajaawa, and didn’t find him, went away with his scribe.

“The chairman’s gatekeeper was also picked up after destroying his house”.

“The policemen would have arrested the Alajaawa and the council chairman if they had been found.”

“Many people fled the town during the police raid today especially youths whom were main target as culprits for the arson on Ade Master’s properties and obstructing the Police during the earlier attempt to arrest Babanifa, whose offence we don’t know till now.”

Another eyewitness said that one of the men earlier taken away during the attack on the Chief Ifa priest (Araba Awo) of the town, Chief Adeoye Ifaleye, a.k.a. Babanifa, Patanla, was brought back with the operatives.

“But they took him to his house and his residence was vandalized by the men and his belongings were also damaged, reminiscence of Ade Master’s,” the eyewitness added.

At the time of filling this report, details still sketchy about the whereabout of the Monarch. It was, however, learnt that the chairman was already in Ibadan when the incident happened.

Recall that that the chairman, Seun Ojo, Oba Oyetunji and some other leaders of the community had addressed a press conference about two weeks ago in Ibadan over the escalating security crisis in Ajaawa, in which Prince Ade Master, a failed contestant to the throne of Ajaawa during the contest last year, was alleged as the mastermind of the travail besetting the community, which had also witnessed series of kidnapping and murder.