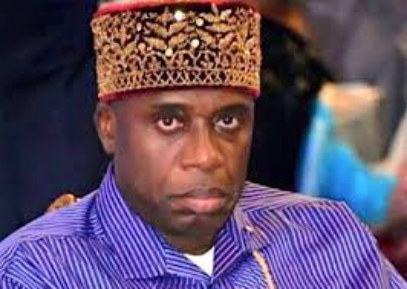 If granted, it will balloon Nigeria’s public debt stock, which, according to data from the Debt Management Office (DMO), stood at $87.239 billion as of March 31, 2021.

Already, there has been an outcry against Nigeria’s rising debt profile since 2015.

Last Thursday, Minister of Finance, Budget and National Planning, Mrs. Zainab Ahmed, had admitted that the federal government was exceeding its borrowing plan for 2021. Ahmed, in an interview with France 24, monitored by THISDAY, had blamed the development on the COVID-19 pandemic and the fall in oil prices.

However, Amaechi said Nigeria had been fulfilling its loan obligations as it had never defaulted in the repayment of loans, especially for the railway projects.

He stated that the federal government had so far repaid over $150 million out of the $500 million facility secured by the administration of former President Goodluck Jonathan for the Abuja-Kaduna railway.

The minister added that monthly revenue from the Abuja-Kaduna railway operation has increased from N70 million to N350 million as of May. He also refuted the suggestion that some obnoxious clauses in the Chinese loans agreements may lead to mortgaging Nigeria’s assets in the case of default.

The minister clarified that he was not behind the recent suspension of the Managing Director of the Nigeria Ports Authority (NPA), Ms. Hadiza Bala-Usman.

He said Bala-Usman was not suspended but only asked to ‘step aside’ to enable an investigation into the management of the authority from 2016 to date. Amaechi said President Muhammadu Buhari would decide on the resumption of the embattled NPA boss after the conclusion of the probe.

Amaechi said: “When you take the loan, you are expected to pay back and as we are talking today we are paying back. “Under the regime of former President Goodluck Jonathan, the loan for Abuja – Kaduna was about $500 million. As of today, we have paid over $150 million on that loan.

“And Nigeria has never defaulted when it comes to loan repayment. And I don’t also expect that we will default on any other loan we have taken. “The loan for Ibadan-Kano is about $1.5 billion. The rest of $500 million came from our budget. I expect that whatever loans we take we will be able to pay.

According to him, the total reconstruction of the narrow gauge line of the Port Harcourt to Maiduguri railway as well as that of Kano -Maradi will commence in June. He added that the Lagos-Kano narrow gauge is currently being negotiated with different interest groups willing to rehabilitate it. He explained: “What we are going to start this June is the total reconstruction of the narrow gauge line. We are rehabilitating Port Harcourt -Maiduguri and at the same time the president has directed that contract be awarded for the standard gauge, which should be funded when the next government comes. “But the difference between the narrow gauge and the standard gauge is just the speed. The Lagos -Kano narrow gauge is the one we are negotiating with different interest groups who want to rehabilitate. “That one is for rehabilitation. And when they finish rehabilitation, they will then run it by themselves and make their money and pay themselves back. We’ve not even commenced negotiation.”

Amaechi said more Chinese loans would be needed to extend the railway services to other states. He said although the Lagos-Ibadan rail line had been completed, the services were still skeletal because it would take six months to test equipment to ensure they are in perfect condition. He, however, stated that to extend the railway service from Ibadan to Osogbo and from Kano to Kaduna as well as other states in the country, the country would need to get more Chinese loans of which negotiations were already in progress. “It takes six months to know that that equipment is in perfect condition. We would continue to test the equipment so that we do not have any train accidents. So we are moving from just two services in a day to four. It will be a gradual progression and I believe that by the end of the year, we will be doing 16 trips in a day,” the minister said.

He also said the continuation of the rail line would only commence when the Chinese loan was obtained, adding that the ministry has already mobilised contractors with some funds pending when the implementation of the loan facility would be concluded. “As soon as we get the Chinese loan, we would commence the construction of Ibadan to Abuja, but before the end of this month, we should commence some of the Kano-Kaduna rail. We have already mobilised the contractors with some funds and we would fund it initially from our budget pending when the implementation of the loan facility would be concluded”, Amaechi said. On the security of the railway system against the backdrop of the activities of vandals and other economy saboteurs, Amaechi canvassed the amendment of the law to make perpetrators liable for manslaughter as well as serve as a deterrence to others. He said terminal operators must contribute to the total reconstruction and reorganisation of the Apapa seaport. According to him, the Apapa seaport’s only problem is efficiency, citing the drastic change in the port on the day the president visited to inaugurate the Deep Blue Project. He said: “I was in the train with the president on that day and noticed that everything had disappeared, even inside the port that looked like a marketplace was very well organised; no persons were found loitering about, no trucks. What it shows is that the problem of the seaport is the problem of efficiency.” He stated: “If they had the capacity in just one night, because I was there the previous evening, and when I came back in the morning, everything had disappeared; if that can happen in one night, it means that the problem is management, nothing else. Do we need to wait for the president to come before we can be efficient?” He added: “What I’ve done was to have a meeting with the terminal operators and I told them that they have to contribute to the reconstruction of the Apapa seaport. We must rebuild the Apapa seaport, taking into cognisance all the issues that we are seeing now that is frustrating the seaport, like where do you park the trucks, how many trucks are coming into the Seaport at what point in time? “How can a person come into the seaport who has no business being there, what is he doing at the seaport? The seaport is a security area and it’s not for everybody, even me, after my tenure as minister, I’m not entitled to go into the seaport unless I have business in the seaport.”

Amaechi said the Ministry of Transportation would partner the Customs and the Nigerian Ports Authority (NPA) to solve the problem, adding that freighting of cargoes from the seaport through the rail, when it begins, will also ease congestion at the ports.