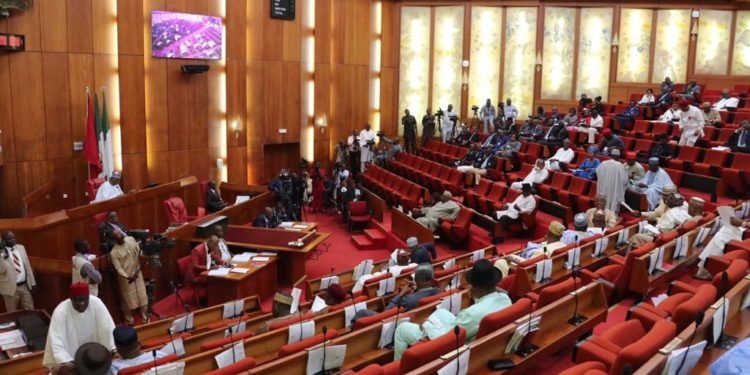 The Senate has observed a minute silence in honour of late Jimoh Isiaka and other youths allegedly killed by police operatives during the #EndSARS protest in Ogbomoso.

This followed a motion by the lawmaker representing Oyo North, Senator Buhari Abdulfatai, during plenary.

The motion was titled: “ENDSARS Protest: The death of Jimoh Isiaka and the attack on the palace of Soun of Ogbomosoland: Need to put our security operatives on their toes.”

Abdulfatai lamented young men were cut short “due to the unprofessionalism of some members of the Nigeria Police Force.”

He urged his colleagues to note with grief the death of Jimoh Isiaka and several other promising youths whose lives were cut short at their prime during the recent ENDSARS Protest which started on 8th October 2020.

He said the right to peaceful assembly and free expression were fundamental principles of any democracy.

He insisted that Section 40 of the Constitution guarantees the right of every Nigerian to peaceful protest.

He informed the lawmakers that “under International Law, one of the duties of state and its law enforcement agencies is to facilitate the enjoyment of the right to peaceful protest.

He lamented the protest snowballed into confrontations between security operatives and the protesting youths in some part of the country and even turned violent in Ogbomoso, Oyo for instance, “as Nigerian police were alleged to have injured seven protesters and shot dead a young man known as Jimoh Isiaka, a constituent of mine, during the protest.”

He said it was saddening as a reaction to the death of Isiaka, the palace of the Soun of Ogbomosoland, was attacked by the protesters while several properties were wantonly destroyed and many palace officials sustained injury.