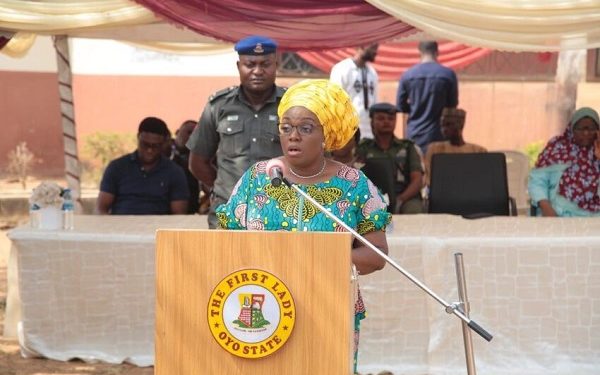 As a way of letting the joy of the celebration of the country’s 60th Independence anniversary spread around, the wife of the Oyo State governor, Mrs Tamunominini Makinde last week hosted children with special needs, orphans and less privileged to a special independence party.

The event which held at her office located around Agodi, Ibadan saw children from over fifteen orphanages, care centres, special homes and non-governmental organisations across the state and top government functionaries gathering for a get-together and fun-filled atmosphere to honour the nation.

The celebration which had in attendance, wife of the deputy governor, Professor Bolanle Olaniyan, the Secretary to the State Government, Mrs Olubamiwo Adeosun, the Head of Service, Mrs Amidat Agboola, commissioners, political appointees also provided an atmosphere of felicitation, dancing, fun, games and sharing of gifts with the special children.

The Oyo first lady who at the event distributed gift items said the programme was aimed at putting smiles to the faces of the orphans and less privileged across the state.

Mrs Makinde urged the children to know that they could be the future heroes and leaders despite their challenges, saying they should only let their current situation motivate them towards making their dreams comes to reality.

Speaking on the significance of the independent day, she said independence anniversary is a reminder of the struggle and persistent spirit of past heroes who have fought so that the people can enjoy freedom.

She said, “October first reminds us of the struggles and persistent spirits of our past heroes who fought, so we can enjoy the freedom we have today. Our heroes who made today’s celebration a reality were once children. As we celebrate today’s independence Day, I would like the children with special needs to know that they too could be the future heroes or leaders of our country Nigeria despite their challenges.

“Dear children, irrespective of your present challenges, I want to let you know that you can reach your full potential. Your current status should only motivate you towards making your dreams a reality because I believe you all have one.”