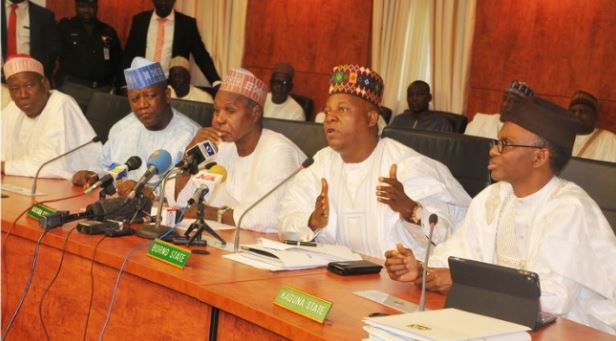 Governors of the 19 northern states had an emergency meeting this evening in Kaduna State over the violence and tension arising from the nationwide #EndSARS protests.

The #EndSARS protesters had over the past weeks been agitating the scrapping and the extrajudicial killings by the Special Anti Robbery Squad of the Nigeria Police Force. It took place mostly in the Southern parts of the country.

However, youths from the Northern region took to the streets to protest the insecurity in the north under the banner of #EndInsecuriyNow. The protest was to draw the attention of authority to the activities of the Boko Haram insurgents as well as banditry.

The protests especially in the South had taken a dangerous dimension following the attacks on the #EndSARS protesters at the Lekki toll gate in Lagos. Also, the protest snowballed into violence in Jos, Plateau State.

Against these backdrops, the regional chief executive officers are meeting to possibly forestall or nip in the bud any possible action that might lead to violence in the North.

Kogi, Kano, Katsina, Bauchi and Kaduna States were represented at the meeting by their Deputy Governors.

The meeting kicked off at 1.50 pm at the Sir Kashim Ibrahim Government House, Kaduna, with the rendition of the national anthem.