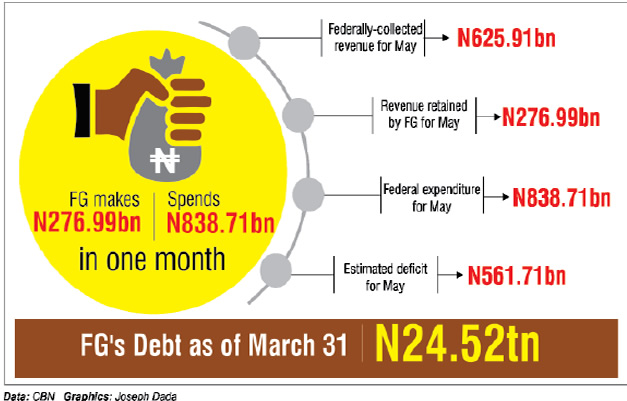 The Federal Government’ s outstanding as of March 31 stood at the N 24. 52tn ( excluding the states and the Federal Capital Territory Administration ) , the Central Bank of Nigeria has said .
The apex bank also disclosed that the Federal Government recorded a revenue deficit of N 561. 71bn in May .
It disclosed these in its ‘ Economy monthly report’ for the month of May . The report was released on Tuesday .
The report said , “

Although a gradual easing of lockdown measures and border restrictions began in May , the report said federally collected revenue ( gross ) was impaired by continued slowdown in economic activities .
Revenue from oil sources fell below the benchmark and the level in April 2020.
This was because the price of Bonny Light crude dropped sharply from $55. 66 in February to $32. 01 in March ; the reference price of crude oil sales for NNPC ’ s earnings in May 2020, it stated .
The report said the federally collected revenue in May 2020 was estimated at N 625. 91bn.

This represented respective declines of 52. 4 per cent and 31. 6 per cent , relative to the monthly benchmark estimate of N 1. 31tn and the April 2020 receipt of N 915. 28bn .
The observed shortfall reduced the revenue available to the three tiers of government in May 2020.

“Thus , the net sum allocated was N 584. 45bn ( after statutory deductions and transfers ) compared with N 620. 52bn shared in April , ” it stated .
The report said majority of the subnational governments generated minimal internal revenues , making them susceptible to fluctuations in federally collected revenue.

At the federal and subnational levels , it added, the incipient fiscal crisis may not be steadied anytime soon.
Allocations to states and local governments in May 2020 fell short of their levels in the preceding month and corresponding month in 2019.
The allocations also remained significantly below the 2020 benchmarks by 46. 6 and 39. 8 per cent for states and LGAs respectively .
Consequently, it added, some state governments set up committees to revise their budgets for 2020.