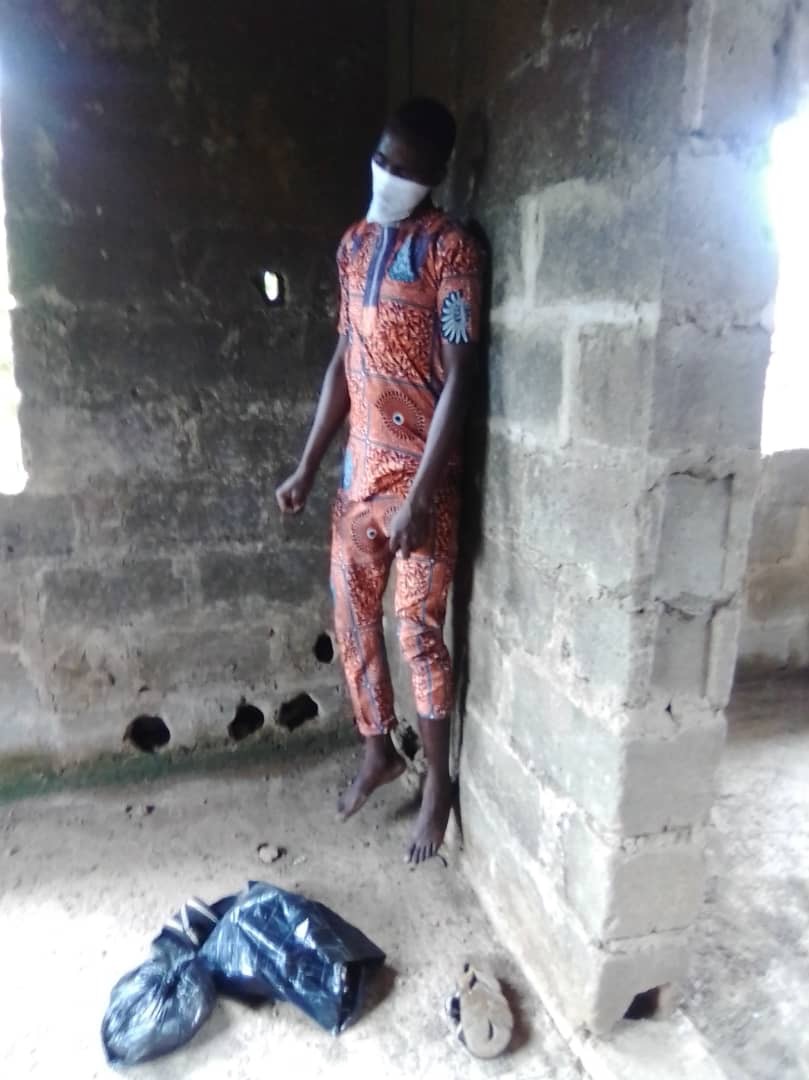 A 22-year-old commercial motorcycle rider, Ayuba Sarafa, on Friday hanged himself in an uncompleted building beside his uncle’s house at Amuloko area of Olorunsogo in the Ona Ara Local Government Area of Ibadan in Oyo State.

Ayuba was said to be the only son of his late father. His mother, Nike, who travelled to Ibadan from Owu in Ogun State, where she remarried, wept uncontrollably, claiming that his son was wasted by some evil forces.

His uncle, Kazeem Tijani, said since Ayuba went to work on Thursday mornimg, he didn’t see him till he went to sleep at night.

According to his uncle, Kazeem, the whereabouts of Ayuba was not known until yesterday when his phone was being called to ascertain his state and the ringing tone was being heard close by. After intent listening, a woman was said to have traced the tone to the uncompleted building where he was found hanging. The phone was in his pocket.

Two black plastic bags were seen on the ground with his pair of sandals also flung there. According to some residents, items found in the bags included: a white garment (Jalamia), two types of perfume, a new white singlet, chin chin, biscuits and other personal effects. He used a white handkerchief as a face mask.

Asked what he felt could have caused Ayuba’s death, his uncle, a native of Apomu in the Isokan Local Government Area of Osun State, whose business is sale of scraps,  said: “Ayuba got the motorcycle on hire purchase basis and he was paying the instalments adequately. He was my brother’s son. He was not indebted to anyone and he was not starving at all. He was not married. He has been living with me for the past two to three years. He was working with me before he got Okada. He was initially a tailor and he was doing fine. We have searched his room but we could not find any note that he could have left, though we could not search his body. I have called our relations in Apomu; they are on their way”.

Speaking with the Chairman of the Okada Riders Association at Amuloko where Ayuba was a member, Mr. Oluwatosin James, described Ayuba as a very cool and easy-going rider. According to him, “The news of Ayuba’s death came to us as a rude shock. It is this morning that we heard of the news at the Park. He was very reticent and would not fight anybody. Once he did his okada business in the morning, he would go and park and go to his uncle’s shop to assist him. Out of N390,000 that he got the Okada on instalment, has paid up to N77,000 that is remaining. There was no issue of threat to him from the person who gave him the okada. In fact, the person is like a brother to him. So, we are confounded over this incident”, he said regrettably.

As at the time of filing this report, the body of Ayuba was still dangling as traditional worshippers were making arrangements to bring it down for sacrifice to be performed lest the death turned a pestilence in the cimmunity.

A police officer from Akanran Division was also on ground to make proper documentation on the incident before burial would take place. Landlords in the area were stunned and many of them were short of words.