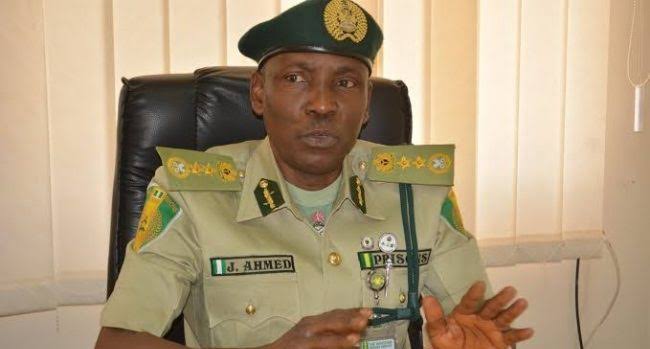 Indications has emerged that the controller general of corrections, Jafaru Ahmed has failed to retire after spending 37 years in service.

Some within the service are wondering what would happen in the next 24 hours as many were reported to be kicking against the purported extension of the correctional boss who has been accused of age falsification and multiple allegations.

A highly placed source told Mouthpiece NGR that Jafaru supposed to proceed on retirement today but he said he was given an extension but HoS said there’s nothing like extension for any public officer.

The Director of Information, Office of the Head of Service of the Federation, Olawunmi Ogunmosunle, had on Monday said the Federal Government has not approved extension of service for any retiring officer in public service.

She asked Nigerians to disregard a circular said to be trending on the social media on the matter, describing it as a fake document.

Ogunmosunle made the clarification in a statement titled “No extension of service for public service retirees” which she made available to journalists in Abuja.

The statement was in view of a fake circular purported to have emanated from the Office of Head of Service and being circulated in the social media.

According to the statement, members of the public are to note that the content of the circular is fake, incorrect and did not originate from the Office of the Head of Service.

“The letterhead used for the circular ‘Roll-over service for those due to retire within the COVID-19 era in 2020” and dated July 13, 2020 is not the letterhead of the OHSF, the outline of the entire circular, from the distribution list to arrangement of the sections including the grammar is completely out of sync with the way and manner circulars are issued in the office.”

“Furthermore, the Director Overseeing the Office of the Permanent Secretary, Career Management, Office of the Head of Service at no time issued or signed any such letter.”

Asked if the Controller general of correctional service has finally bowed out, a source quipped; has he handed over to the most senior Deputy Controller General as he proceeded on retirement after 35year and a year extension of service which ended on 21st July, 2020 after several alteration and falsification of his age from the service record?

It was gathered that the House of Representatives, on Tuesday, took a motion to investigate allegations that over N613.5 billion appropriated to cater to correctional centres and inmates across the country.

Motion to probe the alleged pilfering of the funds, by correctional officials, was brought on the floor, by Minority Leader, Rep. Ndudi Godwin Elumelu.