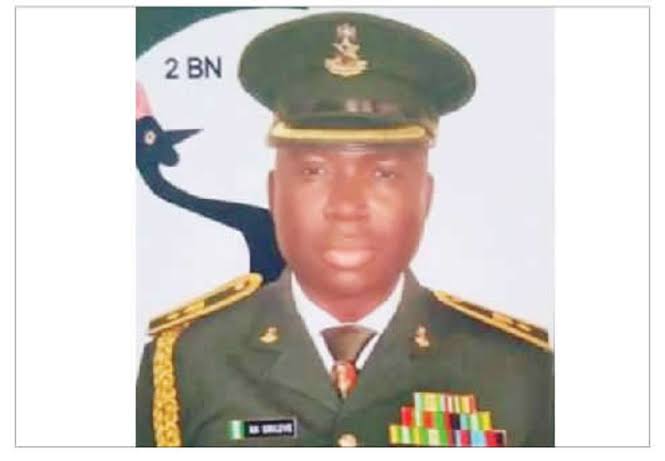 Gbileve died after his friend crushed him while reversing his Toyota Camry car last Tuesday.

PUNCH Metro gathered on Sunday that the deceased resumed as the commanding officer of the battalion about three months ago and travelled to his hometown in Benue State on vacation.

Gbileve, a regular combatant officer, was said to have sent his driver and orderly on an errand, while he had a few drinks with his friend.

After the outing, his friend reportedly offered to take him back home, but as he reversed his car, he reportedly lost control and crushed Gbileve, who was sitting on a chair at the open pub, and killed him on the spot.

A source stated, “On Tuesday, May 26, 2020, Lt. Col. Gbileve, while on a vacation trip to his home town, Markudi, sent his driver and orderly on an errand, while his friend decided to give him a lift in his Toyota Camry, because his driver delayed in returning.

“But the friend accidentally knocked him down as he was reversing the car. The incident occurred after the two men had taken some drinks. The friend was subsequently taken into military custody for investigation.”

It was learnt that the deceased participated in the Nigerian Battalion 43 of the United Nations operation in 2014.

Until his appointment, he had spent five years in the North-East fighting Boko Haram insurgents.

The spokesman, Nigerian Army, Col. Sagir Musa, could not be reached for comments as he did not respond to calls to his mobile telephone and had yet to respond to an SMS on the incident as of the time of filing this story.