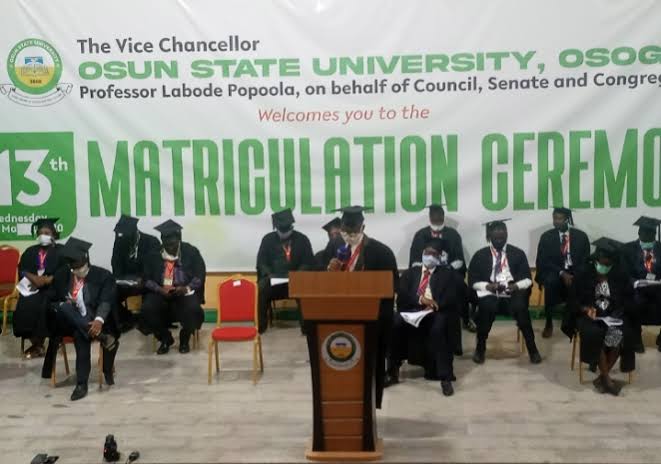 The Union lashed out the VC alleging that he was aiming to use the matriculation to get financial favour from the federal government.

The Union stated that its strike was still on to get Federal government commit funds to infrastructure including Information Communication Technology which is central to online delivery mode.

In a release signed by the Ibadan Zonal coordinator of ASUU ,Professor Ade Adejumo, ASUU described the virtual matriculation as a charade.

According to the Union, the University has succeeded in exposing the hapless students whose parents are experiencing non-payment of salaries, amputated salaries, disengagement and rightsizing due to the ongoing COVID-19 pandemic ravaging the world to be exploited by cybercafe operators.

ASUU noted that poor students do not have the wherewithal to cope with financial demands of online learning saying this is why ASUU is on strike to make Government fund revatilisation of infrastructure including ICT.

The University of Osun had conducted virtual matriculation in a ceremony attended by only the principal officers of the institution led by the Vice Chancellor, Labode Popoola who stated that the institution will strive to be a 21st century university.

But ASUU stated that UNIOSUN cannot complete effectively as it lacks the infrastructure to execute e-learning delivery.

According to the Union, members of the Union are on strike adding that the students should not be scammed to expect virtual classroom.

” In the UNIOSUN’s Vice-Chancellor’s heart of heart, can he honestly beat his chest that all the students of that University have wherewithal to key into his e-learning platform. Moreso,given the fact that majority of the students are from very humble backgrounds, is this policy not a ploy to shut out such students from accessing the teaching and learning interaction? Mr Vice-Chancellor should come out clearly to tell the nation what his real motives are? We suspect, the motivation here is financial rather than altruistic. Is this another antic to undermine ASUU that the VC knows is currently on strike? To this, we say anyone who works at cross-purposes with our Union’s patriotic struggle to improve funding of public universities, is an enemy of the people.

Anyone, in the guise of being a Vice-Chancellor, who subverts the current struggle of the union, through organising of phoney teaching arrangement, which the Nigerian public universities cannot effectively deliver, is living in self-deceit and a fool’s paradise.

But for ASUU’s historic struggles, will characters like Prof. Labo Popoola have any meaningful public university to preside over as Vice-Chancellors? For avoidance of doubt, this struggle will succeed like others before it to the eternal shame of characters in the mould of the Vice-Chancellor under reference here.”