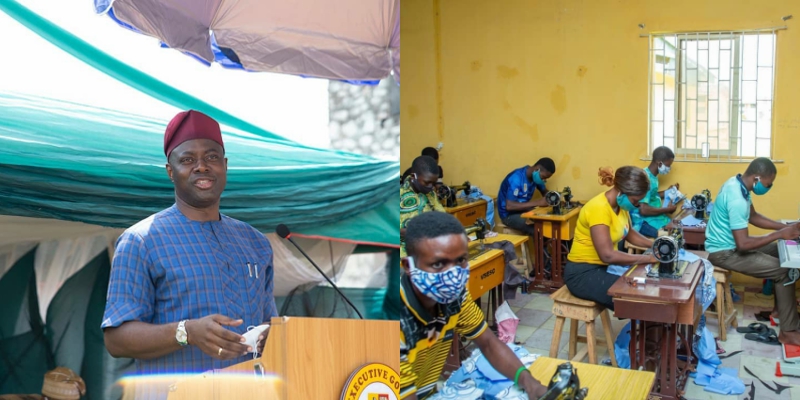 Oyo State Tailors Association may have cashed out on Governor Seyi Makinde over an alleged N40, 000, 000 from the ‘Monkeys’.

The ‘Monkeys’ are the juniour tailors who are actually doing the job but given stipends because it is government contract – “Monkey dey work, Baboon dey chop.”

Recall Governor Seyi Makinde in an effort to curb the spread of Coronavirus in the state and protect his people had commissioned 1milllion face mask production by local tailors, with aim of also providing more jobs for his people.

“Today, we reached a decision to implement this measure while the Government will produce an initial one million cloth face masks to kick start the mask in public places policy for Oyo State,” Makinde said.

“We are collaborating with experts who have already designed these face masks to train the tailors on how to make them while 100 tailors will be commissioned by Monday, the 20th of April, 2020 to make 10,000 face masks each.”

But it seems the Tailoring Association of Nigeria (TAN), Oyo State chapter have decided to be Baboons, like

He wrote: “Seyi Makinde gave out the contract of 1 million face masks at N60 per piece to Tailor Association in Oyo state. Interestingly, the leadership of the Association gave the tailors N20 per face mask to produce 1 million pieces.”

“ICPC & EFCC should brace up to pick up our local Yahoo”

“If you know this people, you better tell them to go and return the money max this Friday, before they end up in Agodi Prison. I wont say more than that for now!”