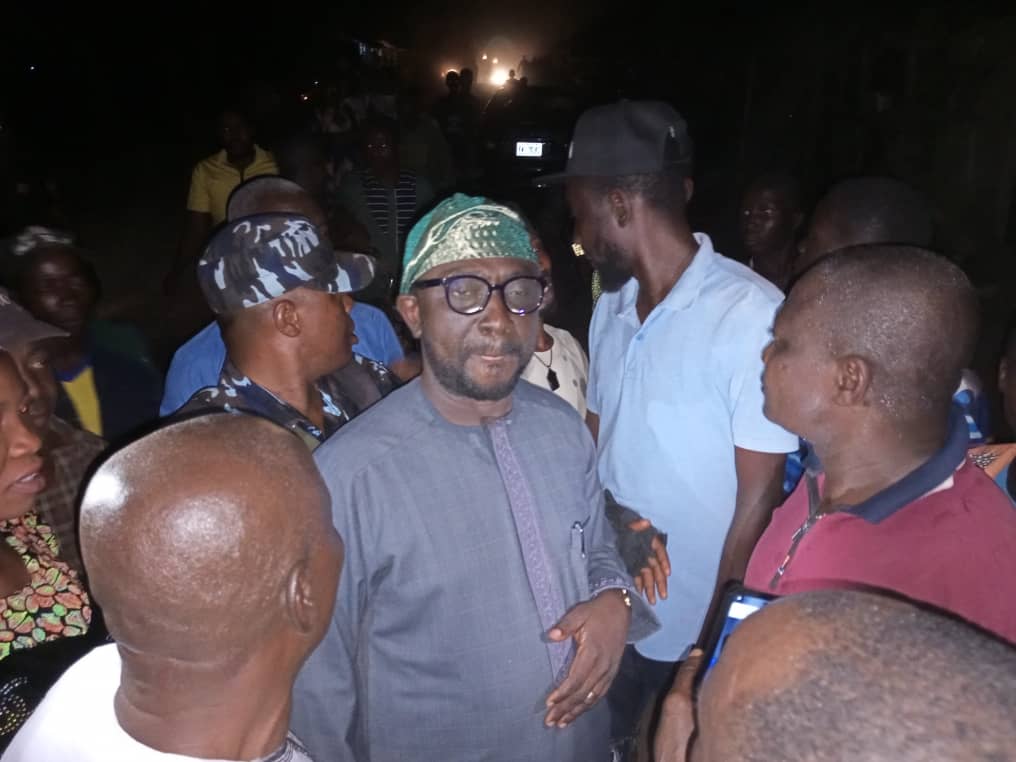 In a rare show of support and love on Friday January 20, 2023, the people of Esa oke trooped out in their hundreds to welcome the candidate of APC for House of Reps election in Ijesa North Federal Constituency to a Town Hall meeting facilitated by Dr Jimi Dada, a close associate of the candidate and a prince from one of the ruling houses of the town, in conjunction with the members of the APC Ward excos.

Chief Folorunso Ogungbe, the chairman of the ward exco, who also doubles as the Lomoofe of Esa oke, in his welcome address, thanked the candidate for the roles he has been playing within the party and assured the candidate of the support of the entire party members at the polls.

The Assistant youth leader, Mr Faseyi Kayode, the Women Leader for the ward, Mrs Abiodun Orija of the ward and the Legal adviser of the ward exco, Mr Olumide Ojo, assured the candidate of the total support and maximum votes of the youth, the women and all the indigenes of Esa oke.

They however, challenged the candidate to fulfill his numerous promises to the electorate and not to forget the fact that he will be going to the green chambers to represent the constituents, and as such, should be loyal and sincere to their cause.

In his speech, Mr Ayo Oladimeji, the overall coordinator of Liberation Movement, a non-partisan socio- cultural group based in the Federal Constituency advised the candidate not to forget the plight of the electorates, who toil day and night to ensure a better tomorrow for themselves by voting those they believe will champion their cause once they get to elective posts.

He declared that as his organisation has thrown their support behind Seun Odofin for the Post he is vying for, based on his achievements within the federal Constituency, the organisation will not hesitate to join hands with the masses to send him packing from the office if he does not perform after four years.

Baba Adeosun, Hon Niyi Ekundayo a former Vice chairman of Obokun Local Government Council, Basorun Omojowogbe, a former Chairman of the same local Government Council and indigenes of the town, as well as Mr Niran Babanumi- a retired school Principal in the Federal Constituency, took time to extol the virtues of the candidate, as they reel out his positive contributions to the party n particular, and to the entire federal Constituency in general.

On his part, Dr Jimi Dada thanked the entire people of Esa Oke for coming out in large numbers to welcome Barrister Seun Odofin who is equally a Son of the Soil.

He assured the people of Esa oke that they will never regret their association with the candidate.

While responding, the candidate, Barrister Seun Odofin said he has come back home and he is ready to replicate all he has done in ijebujesa in Esa oke and all other towns in the Federal Constituency.

He enjoined the people of Esa oke to reject politicians who are only interested in doling out pittance out of people’s collective heritage to them during election period.

He asked the people not to be confrontational in their approach, but be resolute and speak with their votes on February 25, 2023 by voting en masse for APC. He told the people to look forward to more of this town hall meeting where there will be both interactions and integration with the constituents, during which he will listen to their genuine concerns and where joint solutions will be proferred to issues and difficulties facing them individually and collectively.

Barrister Seun Odofin later visited prominent elders in the town where the elders assured him of their support before,during and after the February 25 elections.In the entourage of Barrister Seun Odofin was Engr. Remi Omowaiye,  the head of logistics, Osun State Tinubu-Shettima PCC, members of Odofin Joint Action Committee, members of Liberation Movement of Obokun Oriade Federal Constituency,Comrade Niyi Ajifowobaje and a host of other Oriade Obokun prominent indigenes