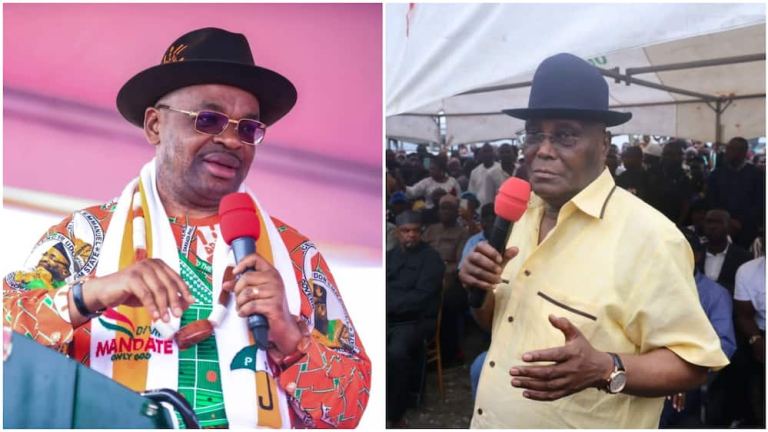 Governor Emmanuel is the chairman of the Atiku/Okowa campaign.

Earlier, Bauchi State governor, Bala Mohammed, slammed Atiku for joining forces with his political adversary in Bauchi in order to frustrate his second term bid, and demanded for a public apology from the presidential candidate.

Ayu had also promised, after he emerged the National Chairman of the party in 2021 , to step down if a northern presidential candidate emerged.

However, his refusal to step down, obviously supported by Atiku, led the Wike camp to pull out of the PDP Presidential Campaign Organisation, PDPPCC.

Wike is joined in the Anti-Ayu/Atiku stance by the governors of Abia, Benue, Enugu and Oyo States with key members of the party’s National Working Committee and National Executive Committee.

MOUTHPIECE NGR learnt the crisis took a different dimension with Emmanuel complaining to his aides and key allies that Atiku’s refusal to release funds will affect the conduct of the campaign.

The Akwa Ibom State governor, who also contested for the PDP presidential ticket with Atiku, told allies that he could not “use state funds for the presidential campaign.”

“I would rather resign than appear incompetent,” Emmanuel was quoted as saying. The ally further revealed that he would like to campaign for Atiku but his hands were tied because of lack of funds.

“At the moment, we are waiting for the candidate to release funds so that the party can start campaigning for him here but if he doesn’t do so, then we would just focus on our National Assembly and state candidates.

It is not that the governor does not support him but the fact remains that our governorship campaign is our priority at the moment,” Emmanuel reportedly told a group of select journalists.

However, the Commissioner for Information and Strategy, Ini Ememobong, told THE WHISTLER he is not aware, noting that, “The Governor is a gentleman and doesn’t issue threats, he discusses. He is a natural peace builder wherever he finds himself, so we know he is pursuing peace and reconciliation to help the party win.”

While Atiku would find it difficult to stage campaign rallies in Abia, Enugu, Oyo, Rivers and Benue, the emergence of the crisis of confidence in Bauchi, one of the states he is expected to win, has thrown his campaign organisation into fresh worry.

Mohammed accused Atiku of vendetta, for allegedly daring to contest against him during the presidential primary of the party.

In a strongly worded letter, in which he demanded for a public apology from Atiku and addressed to Ayu, the former Minister of the Federal Capital Territory accused Atiku of “treachery targeted at my person and office, undoubtedly endorsed, directly or indirectly, by the presidential candidate of our party. His Excellency, Alhaji Atiku Abubakar, GCON, Wazirin Adamawa. In this game of political mischief, he is in league with some political stakeholders from Bauchi State, who have constituted themselves into a “Bala Must Go” conspiracy.

“While Alhaji Atiku Abubakar and his political cohorts insist that I must be “punished”, for contesting against him during the presidential primary of our party, the self-acclaimed “kingmakers”, around the Wazirin Adamawa want a pound of flesh from me because I have refused to capitulate to their unbridled sense of entitlement, which is pregnant with selfishness and dictatorial tendencies.”

Mohammed further said, “The lust group of the “Bala Must Go” campaigners are those whose ego has been bruised by my continued political relevance, rising national profile and the groundswell of public acclamation that has trailed unprecedented developmental strides of the PDP led Administration in the state.”

He said, “Rather than abate, the mischief and treachery have escalated, under the watchful eyes and knowledge of Alhaji Atiku Abubakar who, to all intents and purposes, is the leader of the groups.

“The footprints of this undeserved hostility, bordering on anti-party activities, litter the political terrain, but will mention just a few here.”

According to Mohammed, Atiku snubbed him after the conclusion of the presidential primary despite his prompt concession of defeat and congratulated him upon his nomination, Atiku still excluded him during his visit to other aspirants who ran against him.

He said further: “Worse still, the fact that I swallowed my pride and led a delegation of my associates and major stakeholders of my state on a solidarity visit to his Asokoro residence in Abuja, to pledge my loyalty and support, was not enough for him to reciprocate my gesture of goodwill.

“Instead, he took advantage of the occasion to express his displeasure with me and to hint (FOREWARN ME) that for the purpose of his 2023 presidential campaign in Bauchi State, he would rely on his aforementioned associates, many of whom have turned out to be my traducers.

“Despite my purported appointment as Vice Chairman of the Presidential Campaign Council PCC, which unlike others, I accepted, in good faith. I was excluded from the activities of the PCC as it relates to my office.

“I was deliberately sidelined from the reach-out campaign of the PCC in Kaduna which interacted with major stakeholder groups and the Northern political establishment such as the Arewa Consultative Forum (ACF), Northern Elders Forum (NEF), Sardauna Foundation, Arewa Research and Development Project, etc.

“Open fraternisation with “Bala Must Go” exponents, most of them from the opposition, without detoxifying them of their virulent and destructive animosity towards me and the PDP-led Administration in the state.

“Undisguised efforts to sabotage my re-election and impose on the state a governor from another party who is ready to satisfy their selfish interests to the detriment of the larger interest of the people of the state.

“And to expect that I will remain frozen to the spot where I am being politically guillotined, will be the heigh of delusion: only a tree would be so dumb and indifferent. If all that I can get for my loyalty to the party is the current betrayal by an arrogant and defiant group, then I should be free to take my salvation in my own hands.”

The governor added that “So long as my crime is that I pursued my presidential ambition to a logical conclusion despite all the intimidation and that I have put the interest of the people who elected us, and to whom we remain accountable, above some special interests. I have no regrets or apology.”

The governor demanded that, Atiku “should issue a public statement disowning those renegade elements who are neck-deep in the anti party plot of subverting my re-election effort and to admonish members of our party to reject the devious overtures and manipulative strategies of my detractors.”

He warned that failure to do that within a reasonable time frame, coupled with explicit guarantees of sincerity of purpose and public support for “my re-election by the presidential candidate, I may withdraw from the PCC and feel free to create new measures and strategies that will guarantee the election or re-election of all PDP candidates in Bauchi State and myself.”

When contacted, Ihiedu Aniagwu, the spokesman for the Atiku Campaign, told THE WHISTLER that Governor Emmanuel will not quit the campaign. He said Governor Emmanuel “is very much committed to the PDP victory. He is the Chairman of the PCC. He’s somebody that’s leading the whole team and showing direction.”

He said the report that he threatened to pull of the PCC was the handiwork of the opposition “who have seen that we are moving very fast, and anything they could put in as far as slowing us down is concerned they put them in.

“We are not slowing down, all our leaders particularly the Akwa Ibom state governor is very much committed. Those who are not on board, we have said that in the course of time, they will see reason to follow our train.”

On Governor Mohammed’s letter, he said he was not “aware Mohammed wrote any letter,” adding that Atiku did not do anything to warrant such a letter.

He said, “All I know is that the party’s leaders are committed to PDP victory.”