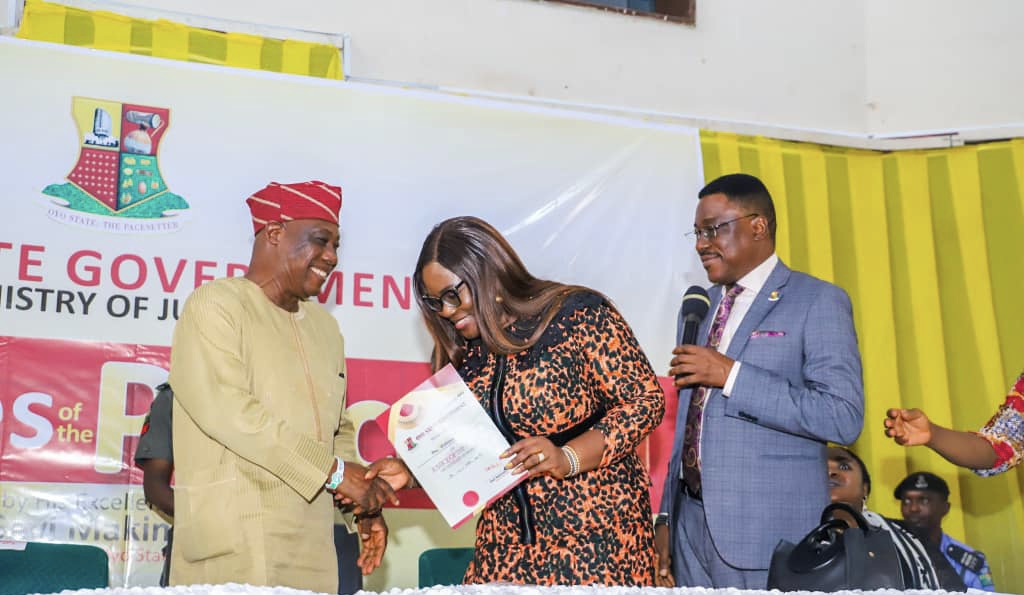 The Secretary to the State Government, Mrs. Olubamiwo Adeosun, the Special Adviser on Political Matters, Babs Oduyoye, as well as Royal fathers, Muslim leaders, and noteworthy stakeholders were also given the award in appreciation of their public services in the state.

The award was given to the recipients on Wednesday at the House of Chiefs in Agodi secretariat, Ibadan, by the governor, who was represented by the deputy governor, Barrister Bayo Lawal.

MOUTHPIECE NGR understands that the award is the first of its kind in the state of Oyo that a quite appreciable number of people were appreciated with JP awards.

While extending his congratulations to the recipients, Makinde emphasized the symbolic nature of the event and its importance, pointing out that justice and peace are the cornerstones of democracy and good governance, and that they unquestionably reflect the values that His Excellency, Seyi Makinde’s administration upholds.

He stated that without peace, there can be no peace and without peace, there will be no society which has made government to thought it fit to partner with men and women of honor across the State in its efforts at bringing the dividends of democracy closer to the people.

“About 400 men and women have been identified as ‘keepers of peace” and they are being commissioned to assist in sustaining peace in their respective communities.

“Historically, the conferment of noble men with the title ‘JUSTICE’ of PEACE’ emanated from England around the 11th Century when it became imperative for the king to appoint men, then known as “Keepers of Peace” to ward off disorderly association within localities and also help in enforcing some laws. With time, they were required to be amen of Reputation and appointed to preside over felonies alongside other men who are learned in the law.

“At this point, these men of reputation worked with magistrates who were able to assist them in the application of the law to issues that came before them. They were never required to be lawyers even though they perform functions relating to the law. They were however, required to apply the law in determining the offenses that were brought before them. By the 13th Century, they were known as Justice of Peace and they became saddled with multifarious administrative and judicial duties. Essentially, they kept the peace and were able to help the king to administer the law throughout the length and breadth of the kingdom.”

“Your duties as a Justice of the Peace must be performed with utmost care because you are now a partner, on governance, with the State Government in your various communities. You are being empowered to provide specified administrative and judicial functions which form part of everyday living and which may not be readily accessible in your communities. Therefore, to whom much is given, much is expected. Your activities in your communities should bring respite.

“As a government, our determination is to raise more responsible citizens who obey the law and perform their civic duties without having to be compelled. Your presence in your communities as Justices of Peace should help in achieving this.

“I must also mention that, with this award comes some rights, privileges and responsibilities, government will therefore not take any infraction lightly.

“On this note, I congratulate you on this well deserved honor. With your cooperation, we shall have a peaceful and just society,” he said.