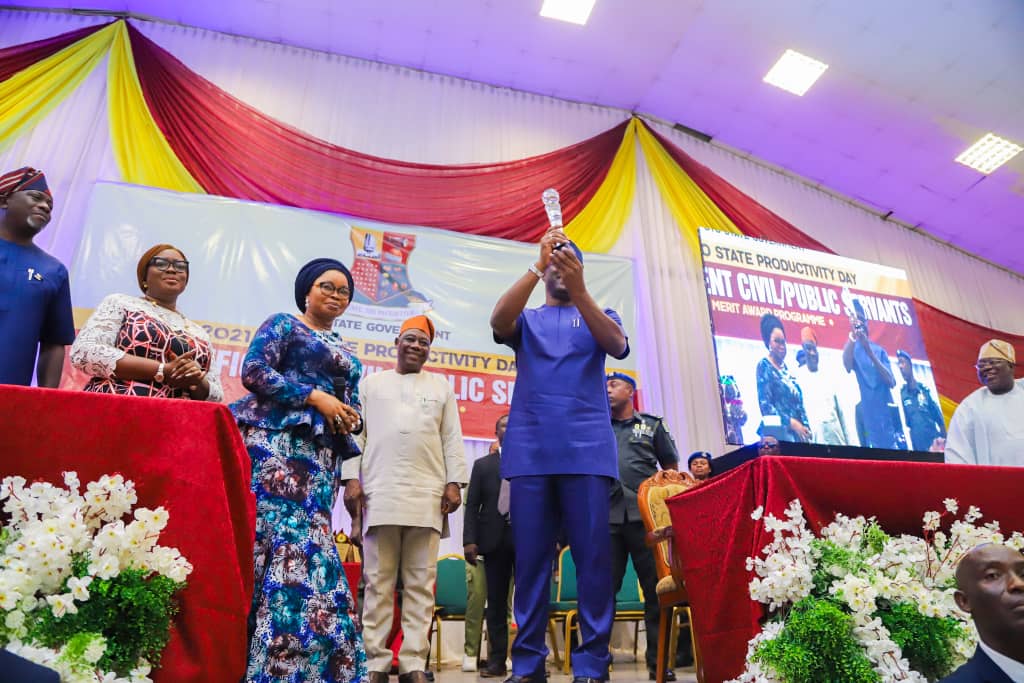 Oyo State governor, ‘Seyi  Makinde, on Tuesday, declared that his  administration would continue to modernise the civil service in the state, by providing tools required to run an efficient system in the state.

The governor gave the assurance at the 2021 productivity and merit award ceremony, held at the Emeritus Professor Theophilus Ogunlesi Hall, UCH, Ibadan, appreciating civil servants for their support and commitment to the service, and by extension, the state.

A statement by the Chief Press Secretary to the governor, Mr. Taiwo Adisa, quoted the governor as explaining that his administration will continue to give priority to the welfare of the workers in order to ensure optimum service delivery in the state.

He stated that the selection of awardees for the 2021 productivity awards was based on merit.

The governor explained that under his leadership, the government will continue to insist on equity and merit as the guiding principles propelling his administration.

He said: “First, I would like to thank the Merit Award Organising Committee for a job well-done, in the sense that I signed all the award letters in the early hours of this morning.

“While signing, I was able to recognise about three names who have worked closely with me. So, for the rest of the awardees, it was a decision taken without any influence from anybody.

“I am thanking them for validating that this is our Oyo State. It is the state where you do not need to lobby for whatever belongs to you. “So, I want to, on behalf of all of us, say thank you. And for my colleagues, the reward for hard work is more work. We will keep pushing you to even do more.

“I listened to some of the speakers’ goodwill messages. They were showing appreciation for prompt salary payment, timely promotions and all of that. Well, I wish I could do that with my money but the answer is no. It is our commonwealth, because the money belongs to all of us.

“Of course, a few years ago, all of us seated in front of you were not here. If you call the Chief of Staff at that time, it was a different name not Honorable Segun Ogunwuyi or the SSG or even myself. So, the government will come and go. Players will also come and go but our state will remain. “Whatever we are able to do, the people that are coming behind us will be able to continue from there.”

The governor warned the people of the state to be wary of individuals, who out of their desperation to take over power, forget that no matter what happens, the state would outlast everyone and feed the public with falsehood and fake news.

“When I look at people feeding false news into our environment because they are looking for power – they want to govern the state, I feel bad. Must they wish our state bad luck because they want to govern the people? If all the bad wishes come to pass, when they get to power, they will be grappling with the problems instead of continuing and improving on the legacy that has been built.

“TESCOM, SUBEB are working really hard to improve the state of our education in Oyo State and they are supposed to be encouraged but some people said Oyo State is now number 33 in WAEC ranking. Of course, WAEC came out and debunked the false news.

“Sometimes, I just sit back and ask myself how somebody, who wants to govern this state, will be wishing something bad for the state.

“So, what I am saying is, all of us in our different communities must let the people be aware that this administration will continue to wish the state something good and better. Tell them not to listen to those wishing us bad in the state.

“I am glad that the ALGON is here. When we came in, we met a backlog of salaries of about 11 local government areas that were not able to pay salaries as and when due, and we took it up. “We cleared those backlogs. Now, they are saying we are strangulating the local government administration – taking their money and spending it on their behalf. “Well, we are not. But for us as a state, we should not forget where we are coming from.

“We can still remember they ran an administration, which refused to conduct local government elections for seven years in this state but we did not do that. Whatever they accused us of is wrong. But at least, we have elected local government administration in Oyo State. “Those are some of the things that I can remember while I was listening to people.

“As an administration, we are doing our part to ensure that civil and public servants are rewarded for the work they do. We will also continue to look after our pensioners. “Where we have noticed there are gaps, we will make the moves to fill them.

“This is just a way to appreciate some of you for what you have done so far. And for those who did not get an award for this year, you will get yours next year.

“We are trying to modernise the civil service in Oyo State.

The tools that are required to run a modern and efficient system, we will continue to provide for Oyo State.

“I am giving the Permanent Secretary of the Local Government Service Commission a deadline that I want to see the building done and dusted before the end of the year. And I have said they should furnish it also. At least, for us, it will be an addition from scratch. “The foundation was laid by this administration and we will commission it and move people into the building.”

Earlier, the Head of Service, Mrs. Amidat Agboola, acknowledged that Makinde was passionate about workers’ welfare, thus making him have a fantastic and harmonious relationship with civil servants and pensioners in the state.

She said since the inception of the administration, no worker has been retrenched or laid off since 2019, adding that no governor has ever been magnanimous to the Civil/Public Servants like Governor Makinde in the history of Oyo State.

She admonished the awardees to remain good ambassadors of the state’s civil/public service, expressing optimism that the awards would motivate them to prepare for greater and tougher challenges in their respective careers.

Agboola enjoined civil and public servants in the state to reciprocate the kind gesture of the Makinde-led administration by putting in their best in the service of the state.