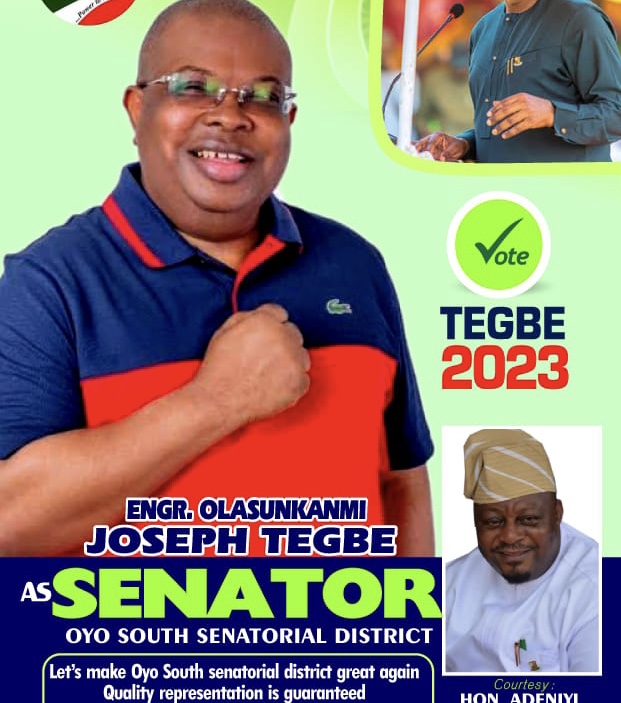 The Director general of Oyo south Senatorial PDP candidate, Hon. Adeniyi Adeyinka Kazim ‘Bibire’ who is also the Special Adviser to Oyo state governor Seyi Makinde on local government and chieftaincy matters has on Wednesday vowed to deliver Oyo south senatorial district for PDP in the forthcoming general election and make sure the senatorial candidate, engineer Olasunkanmi Joseph Tegbe emerge the winner of the senatorial election.

Hon Bibire made this statement during a media briefing with notable team of publishers in his office.

He stressed that his primary responsibility is to deliver Oyo south senatorial district to PDP and most importantly to ensure the victory of the Oyo South PDP senatorial candidate, Engineer Olasunkanmi Tegbe in the forthcoming general election.

He described the Oyo South PDP senatorial candidate, TEGBE as an intelligent, generous, resilient, reliable, gentle and above all accessible man who knows his onions and ready to serve his good people.

Hon Bibire advised the electorates, party gladiators and party spectators to tow the path of issue based campaign while selling their candidate as the Independent national electoral commission (INEC) has lifted the ban on political campaigns.

Fundamentally, Tegbe’s DG eulogised the Governor of the state, engineer Seyi Makinde for his developmental strides in Oyo state, saying the governor has brought dividends of democracy to his people.

According to the DG, the commensurate appreciation the good people of Oyo state can give Governor Makinde for the wonderful job he has done in the state is to vote for all PDP candidate in the state in 2023 poll and allow Seyi Makinde to continue his work till 2027  because one good turn deserves another.

I have been saddled with the responsibility to deliver  Oyo south senatorial  PDP candidate, engineer Olasunkanmi Joseph Tegbe and this task is achievable especially with my formidable team behind me.” The DG submitted