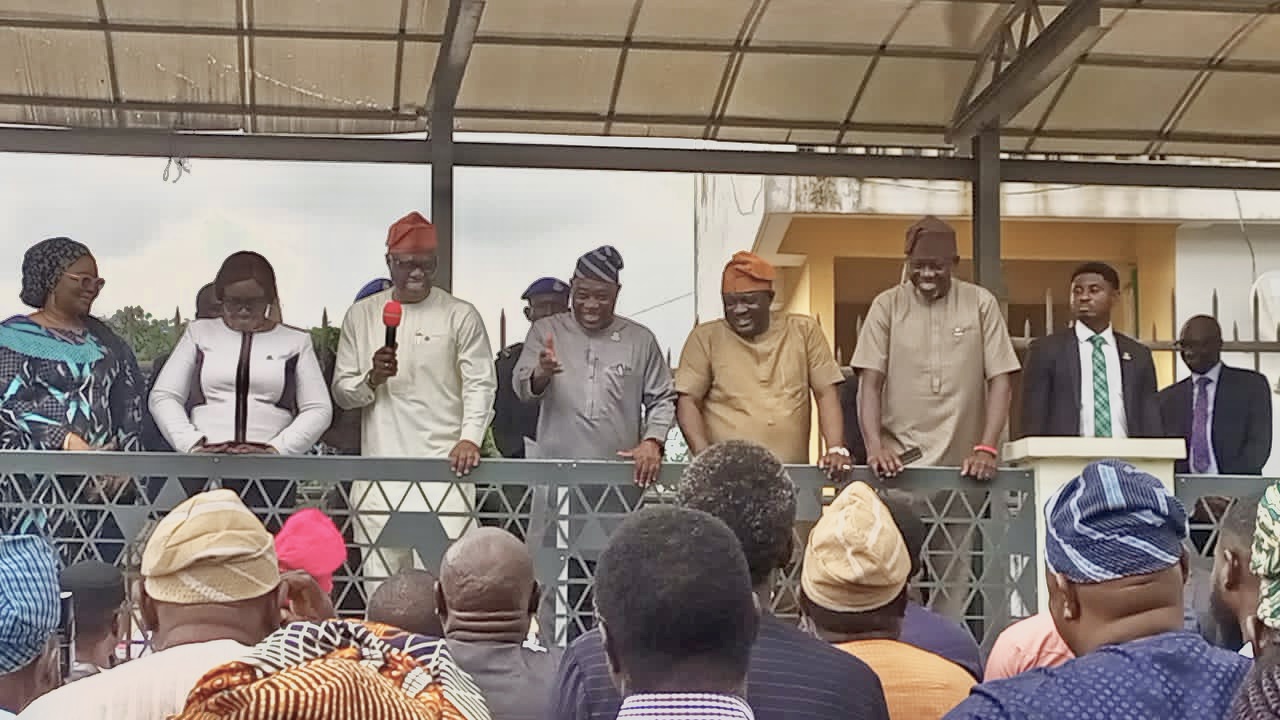 “It is better late than never”, was part of the remarks of Governor Seyi Makinde to his deputy Governor, Barrister Adebayo Abdul raheem Lawal for his level of disposition, trust, commitment, show of responsibility and loyalty on his arrival to the Governor’s office.

MOUTHPIECE NGR reports that the executive governor of Oyo state, Seyi Makinde was cordially welcomed back from his extended vacation by his Deputy, Adebayo Abdul-raheem Lawal on Monday at exactly 1pm.

The deputy Governor had been in control of governance for the previous 21 days while Makinde was away on holiday in London.

His deputy and other key government officials, including the SSG, HoS, Deputy Speaker, Due process, Commissioners, special assistant, among others, gave him a great reception at the Government House amid jubilation and enthusiasm.

During his speech, Governor Makinde, who had earlier playfully referred to his deputy governor as the immediate acting governor in order to elicit raucous applause from the audience, expressed his gratitude to him for the prayer and warm reception he had upon his arrival.

He said: It’s better late than never, adding that he looks forward to cooperating with Barrister Bayo Lawal and for the upcoming tenure. He acknowledged that he should have had someone of his caliber from the start.

With the level that the deputy governor had shown, Makinde said that his vacation would always be an annual event.

“With the level of support everyone has given the acting governor, one thing we have shown is that we don’t have a strong man, but a strong team. Because of the way he has been handling the governance issue, the people didn’t notice my absence for the past 21 days, which makes me happy.”

“We have chosen a selected strong team in Oyo state, and we are able to do that. I appreciate your support, and I know that we are a very strong team. I can promise the residents of Oyo state that we would continue to work for them until the end of this administration.”

The governor said what his administration is doing is not politicking as some people have claimed, but rather part of the state’s development, and that what we put into the state would stay despite changes in actors and players.

“I want to express my gratitude to the deputy governor in particular for his dedication, display of responsibility, and loyalty. Even though we should have done this from the beginning but it’s better late than never. In conjunction with our reelection, I look forward to working closely with you.”

Earlier in his remarks, the Deputy Governor, Bayo Lawal said it gives him great pleasure this afternoon to welcome His Excellency, Seyi Makinde back to his seat.

He said: “I was simply following His Excellency to the tarmac on his flight out, and we split up at a specific location to simply say goodbye. The governor just said, “I’ve given my deputy all of my authority; please grant him the immunity I’m not now granted.” I am aware of the profundity of the claim. I’m appreciative that you trusted me enough to give me your trust’s power.

“Your gesture and magnanimity and trust on me, I am very grateful.”

“His Excellency has gone away, I am happy that he’s back to energize and restrategize. Today, when I saw him, I know he had enjoyed his vacation because he was just smiling while receiving me today.”

“I am happier and I believe sincerely that you are also happy but i am more happier because I have my principal and boss back to his seat.”

“I am also happy that the responsibility of carrying out the task where enormous. I took so many things for granted such that the Governor will say, call me the security, and other people. I will even see him on WhatsApp 2am for the serious job.

“Some people said to me, infact my wife, your eyes is swelling up. At 1am, I will call security personel to ensure the state of security. You are heartily welcomed back sir. I am speaking for every citizen of Oyo state that we appreciate you, we love you and adore you.”

“You have bestowed me with so many rights and privileges which are yours, and I have kept it for you, so I am giving you back to you sir. Take your headache back, my amiable governor,” he said with savory jokes.