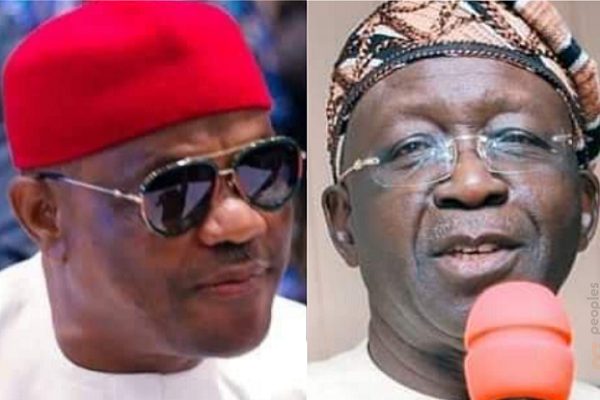 Nyesom Wike, governor of Rivers, says Iyorchia Ayu, national chairman of the Peoples Democratic Party (PDP), may cause the party to lose the 2023 presidential election.

The governor said this in reaction to recent remarks made by Ayu on calls for his resignation.

While speaking in an interview with BBC Hausa on Wednesday, Ayu said those demanding his resignation are children.

“When we started the PDP journey, we did not see these children. They are children who do not know why we established this party,” he had said.

“We will not allow one person to come and destroy our party.”

TheCable had reported how Wike’s allies demanded that the PDP national chairman should step down — as a precondition for resolving the rift with Atiku Abubakar, the party’s presidential candidate.Some members of the party’s national working committee national (NWC) are also said to be pushing for a probe of the party’s finances under Ayu’s watch.

Speaking on Thursday at the inauguration of roads in Ikwerre LGA of the state, Wike said those who Ayu described as children brought him from nothing to be chairman of the party.

He said if Ayu remains arrogant and refuses to resign, it may cost the PDP the 2023 presidential election.“You can imagine what power can do. You can imagine how ingratitude — how people can be ingrates in their lives,” Wike said.

“Ayu, you were impeached as senate president. Ayu, you were sacked by Obasanjo in his administration. Arrogance cannot take you anywhere.

“Now, we have seen that you don’t want the party to win the election. We will help you.“These children — these people you call boys — brought you from nothing.”