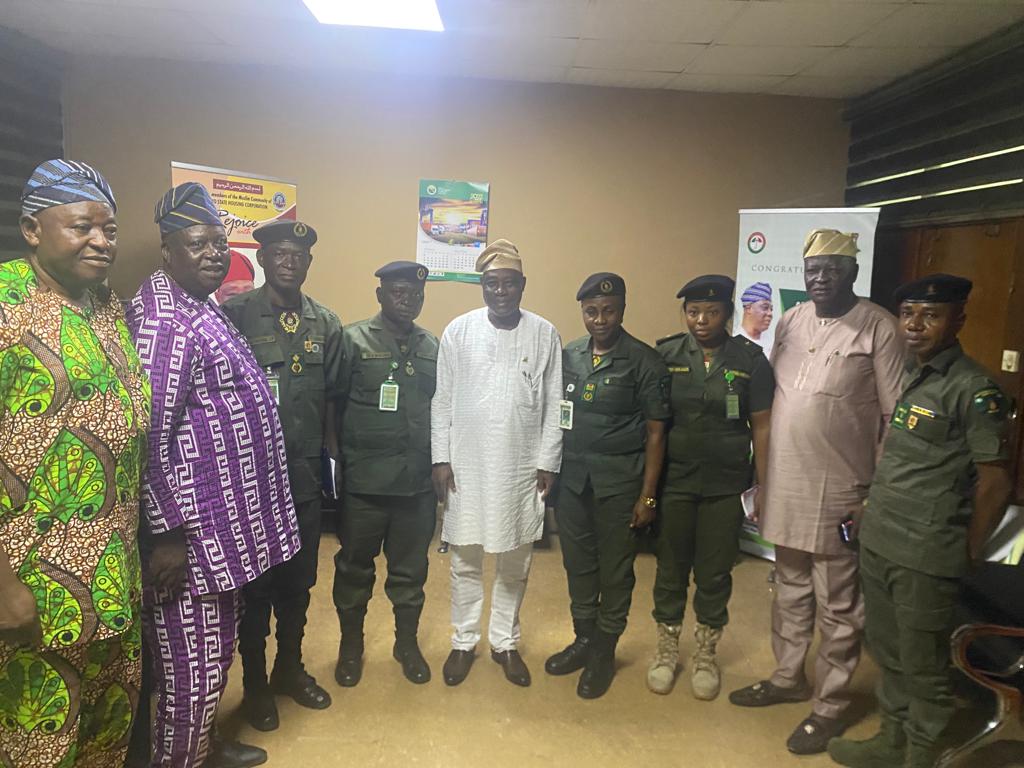 The rangers from the National Park Service; Old Oyo National Park has called for synergy between it and the Oyo State government, MOUTHPIECE NGR reports.

The delegates, ably led by CP Caroline Samuel Olory, first female conservator of park in West Africa, also referred to as Iron Lady of wild life, made the call during their visit to the deputy governor of Oyo State, Barr Bayo Lawal on Thursday.

She remarked: “I am excited to be here. We feel at home. First, to formally congratulate you on the well deserved appointment as the deputy governor of Oyo state.

“We are here to confer on you a honorary ranger. Needless to say that we are protecting 73% of the entire land in Oyo state and largely base in Oke Ogun; notably Kishi where you hail from.

“Old Oyo National Park is very unique and allows tourists to visits. The cultural aspect, the historical and biodiversity makes the uniqueness. We are protecting the treasures of Oyo state.

She further sought Oyo government’s support and synergy with the Park to ensure bandits do not make Oyo forests their hidden place.

“We are protecting where ancestors are buried. We are making sure that the forest is also protected so that there won’t be a place for bandits to make haven in the forest.

“We can’t do it on our own alone, so we need the support of Oyo state government to strengthen the security of the national parks with vehicular movement. We are protecting the larger part of forest reserve. Any forest that’s not adequately man or protected, would always attract bandits.”

“Synergy is very key. The first thing I notice is that synergy between Old Oyo National Park and paramilitary. No single organization can achieve desired result except with synergy and cooperation. In this presence challenges, why forest now used as a target. The number of personnel entering the forest. What we do at our level is to double patrol.

“So, that’s why we are interacting with other agencies to make a patrol to be able to strengthen security in the forest so that bandits won’t take the advantage to strike. We operate within area designated in the National park. We operate within the settlement.

“National parks is under the control of federal government. So, our arrest falls within the range of National Parks. But when there is a case outside our range, we report to police to take charge. Their visit is to discuss how they have been strengthening security and efforts in making sure that no one settle in forest for criminal activities.”

In his remarks, the deputy governor, Bayo Lawal, commended the CP for bravery and unparalleled show of capacity. He said: “You have visited almost all the continent of the world. That doesn’t come so cheaply but with commitment, profundity and focus. And that’s why you are first woman in Africa.

“I will continuously like to associate with people like you to checker record in their profession. Today, I am better educated in respect to game reserve. Before, we use to think that forest is all about national park.

“I can assure you that because of the security of the state, the oyo state government is well committed to the security architecture of the state especially with the kidnapping incident that occurred in ogbomoso where bandits made use of national park to hide.

“I know of Kishi, it is of the same latitude with Jebba. Within hours, when they commit crime, they run away to Jebba. If you have to go vie road on Ilorin, you will spend 4 hours but with bike through the forest, you spend just two hours. So, in this regard, whatever is needed would be adequately looked into and necessary action would be taken.

“It will be difficult for kidnappers to take people into the forest when there is synergy between the national parks and government. We should pay attention to the northern part of the state because of the infiltration of bandits. Even if it is to the extent of buying helicopter to strengthen security because criminal activities are domiciled in the forest.

Aare Bamofin of Kishi land asked them to put forward their request and would be tendered to the governor for necessary action.

At the meeting included Senator Gbenga Babalola; Chairman Board of Tourism and Hon. Samuel Adejumobi Agbarapo.