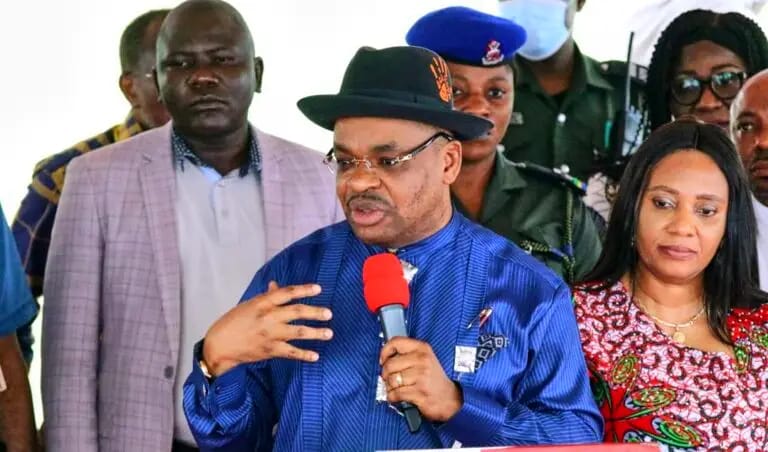 As 2023 general election is approaching, Akwa Ibom State Governor, Udom Emmanuel has appealed to the People’s Democratic Party, PDP, leaders, members and faithful to bury their differences and work together for the victory of the party.

He made the appeal while Fielding questions from Newsmen at the Victor Attah international Airport, Uyo. shortly after his arrival from Abuja on Friday.

Governor, Emmanuel, who was recently appointed as Chairman of the Atiku Abubakar’s Campaign council. appreciates the party leadership and the members of PDP for the opportunity to be appointed.

The Governor who acknowledged that frictions have occurred in the party in time past, stressed that it was time for members to let go of the past and to be in harmony.

His words: “Let me thank all our party members across the country for this confidence they have in me. I also want to say that no one person can do it alone. It involves everybody in all the units, all the wards and all chapters of our party to come together for the party to move forward.

“I want to use this platform to make an appeal that if we had made mistakes in the past we cannot wind back the clock, we cannot recall what had passed yesterday. But we can move forward in the spirit of oneness, unity, prosperity and progress for our party”

Governor Emmanuel expressed determination to work for the victory of the party, as well as the hope that Nigerians would vote accordingly while God gives the victory.

On his new responsibility as chairman of Atiku’s Campaign Council, Emmanuel simply responded, “The issue of the Campaign Council is a very simple matter; our own duty is to do the campaign and Nigerians to vote for us and then God will give the victory”.