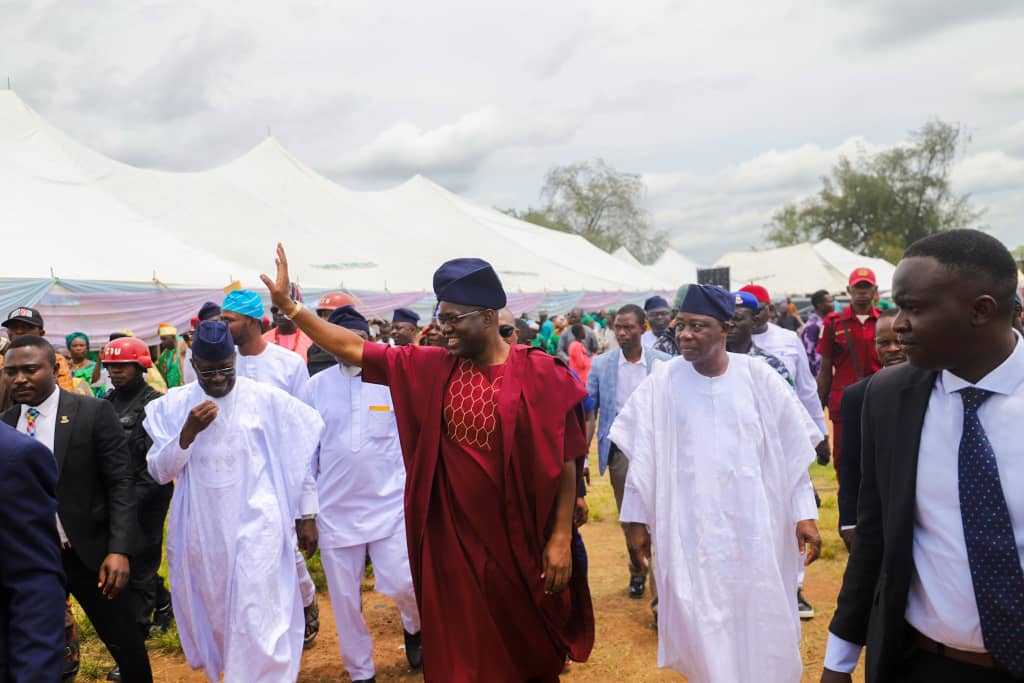 The governor of Oyo State, Seyi Makinde, has received assurances from Barrister Ahmed Raji, SAN, an illustrious son of Iseyinland and the current president of the Executive Council of the Oke-Ogun Development Consultative Forum (ODCF), that the people of Iseyin will elect him again in the upcoming general election in 2023, MOUTHPIECE NGR reports.

Raji, who stated this on Saturday while welcoming and appreciating the Governor and other dignitaries on behalf of Iseyin Community, noted that Governor Makinde’s tenure, which coincided with the reign of the late Aseyin, brought tremendous developments and progress to Iseyinland.

He listed the completed Moniya-Iseyin Road, the ongoing Oyo-Iseyin and Iseyi-Fapote-Ogbomoso Roads and most importantly, the establishment of the Faculty of Agriculture of the Ladoke Akintola University of Technology, after decades of failed promises to Iseyin people from previous administrations, as part of the blessings that came to Iseyin during Makinde’s government.

According to the President of ODCF, Iseyin residents are not ungrateful and would follow the instructions of the Quran, which states that goodness must be returned with goodness, by voting to reelect the governor in the general election of 2023.

Raji, however, stated that the community would still want the governor to address some of its areas of needs, including the fixing of the Ikere Gorge Dam, which he said is capable of generating electricity for the people, giving potable water and boosting agriculture.

He added that the government should also kindly give attention to fixing the Iseyin General Hospital and the potholes that were beginning to appear on the Iseyin Township Road built by the immediate past administration.

While responding to the demands made by Barr. Raji, SAN, Governor Makinde said: “I thank my brother, Barrister Ahmed Raji, SAN. I have noted all you said and what you requested will be granted concerning the fixing of the potholes on the Iseyin Township Road.

“The man in charge of the Oyo State Road Maintenance Agency (OYSROMA) is the Deputy Governor and he is your son, so I can assure you that OYSROMA will act on the request soon.

“Concerning the Ikere Gorge Dam, I think I am the first governor of the state who visited the site more than three times. The benefits which we can derive from there, which are water supply, power supply and irrigation for agricultural purposes are already in our programme. Actually, we need huge funds for this but I can give you the assurance that it is a priority project and would be acted upon. The Dam is also a tourist attraction.”

“Also, concerning the request on the state hospital, the French Government gave Oyo State the sum of €55million to expand and improve our healthcare facilities and the General Hospital in Iseyin is one of the projects we plan to execute. So, it is a matter of time. Everything will be sorted out.

“Lastly, I want to assure you that if you support this government with your votes in the 2023 general elections, more developmental projects beyond what we have already done will be witnessed in Iseyin.”