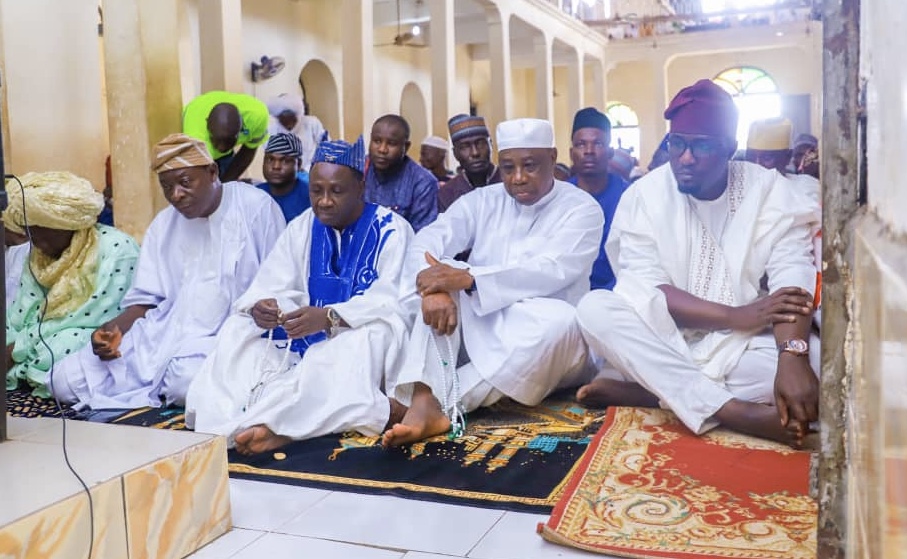 Barrister Adebayo Abdul-raheem Lawal, the deputy governor of Oyo State, joined other Muslims on Friday to observe the Jumah service at the Central Mosque in Kishi.

He said he came home to thank Allah for the opportunity He had given him and for the resounding support from Kishians throughout his political career despite his tight schedule.

Lawal, who is originally from the Agbo compound in Kishi, expressed his gratitude to Governor Seyi Makinde, who, out of pure love, first nominated him as Executive Chairman of the Oyo Housing Corporation before appointing him as the state of Oyo’s Deputy Governor.

He specifically thanked Almighty Allah for the privilege of his appointment and prayed for his principal, Governor Seyi Makinde.

While promising to protect the interest of Islam in the government, he vowed to do everything within his capacity for Islam and also work towards the development of the town.

“Just like I promised at the Oja Oba Central Mosque, I will do all in my power to defend the interests of Islam. I’ll repeat it again here.

“Any time I am wrong, pls don’t hesitate to call me because it is only God that is infallible. I’ll will make corrections”.

“Everyone would benefit from the role of deputy, I believe. You should let me know what you want me to do for the community, just like the Muslim community would, is what I am asking of you.”

“I beg you not to criticize the government led by Governor Seyi Makinde, but rather to lead us in the right direction and explain what should be expected of us so that we can act appropriately.”

“My achievement is for the community’s success and I pray that God will continue to advance our community.”

Earlier, the Kishi Central Mosque Chief imam stated during the sermon that Barrister Abdulraheem Bayo Lawal is not an ordinary Muslim, but a devoted one, urging the congregation members and the general public to dismiss the false information spread by cunning individuals.

The Chief Imam charged the people to support Bayo Lawal in the upcoming general election and show concern for the development of the town in order to show appreciation for Governor Makinde’s favor on them in Kishi with the position of Deputy Governor.

MOUTHPIECE NGR understands that Kishi town is a thriving multicultural nexus of the state and host to a large Muslim community, many of whom have felt development by the current state government.

After the Jumah prayer, Lawal visited the home of IJbah, the PDP candidate for the House of Representatives from the Irepo/Oorelope/Olorunsogo Federal constituency.

He was accompanied by the chairman of RUWASSA, Hon. Omirinde, Professor Abdulone, and Alhaji Masoroju.