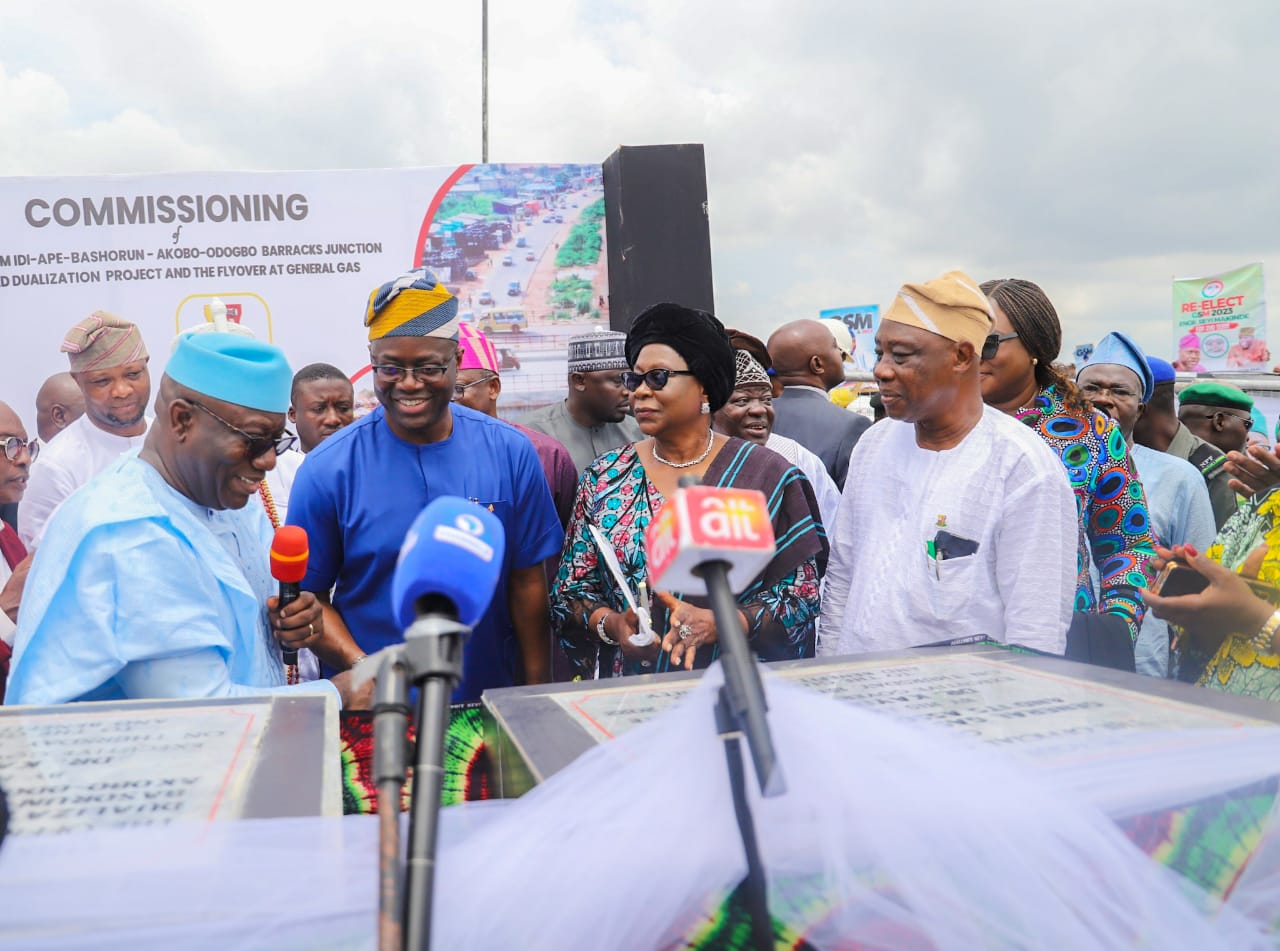 …projects have changed economic status of Basorun, Akobo, others -Makinde

Governor Fayemi, who was the special guest of honour at the event, commended Makinde for delivering such a massive road and flyover project, among many others across all the nooks and crannies of the state.

A statement by the Chief Press Secretary to Governor Makinde, Mr. Taiwo Adisa, quoted Fayemi as  congratulating Makinde for being passionate about the development of Oyo State, saying that the governor is living up to the expectations of the people.

He described Governor Makinde as broad-minded, focused on the job and a man that builds relationships that transcends political party affiliations.

“I want to thank the governor for this invitation. As the chairman of the Nigeria Governors’ Forum, NGF, my primary duty is to protect the interest of the 36 states in Nigeria regardless of the party they belong to. I cannot deliver the full responsibility without the cooperation of all my brothers across the divide. And I can tell you that Engineer Makinde has been a strong pillar of support.

“For me, this is a duty beyond party. It is recognition of what we have promised our people and the pledges we made when we were elected into office – to serve the people who have elected us without hindrance.

“I know this road will be plied by members of APC, PDP and those who do not even belong to any party. To that extent, we must commend both the government that started this road and Governor Makinde for not abandoning the project. The credit belongs to both governments.

“Once again, I must thank the governor for doing this for those of us who are emotionally attached to this road.

“I want to also use this opportunity to endorse the point the governor made earlier. If what we are about is the development of our people, we can disagree without being disagreeable. Once elections are over and it is time for governance, we all should rally round those who have been saddled with the responsibility via the ballot.

“We all owe it a duty to come together to work for the overall benefit of our people. In a state like Oyo where we have had a ding-dong affair in politics, we are all one. I believe anyone who knows Governor Makinde will know that he is broad-minded, focused on the job and he wants to build relationships that transcend political party affiliation. So, that is why I am here.”

Governor Fayemi also cautioned against what he called continued reliance on “majoritarian democracy,” saying that those who win 51 percent at elections must find ways to come together with those who win 49 percent to run inclusive administrations.

Governor Makinde, while speaking at the commissioning ceremony, maintained that the road and flyover project will enhance the socio-economic development of four Local Government Areas of the state.

He explained that the four local governments that will benefit from the project include Akinyele, Lagelu, Ibadan North and Ibadan North East, saying that the present administration will continue to build infrastructure that targets the economy.

Makinde said that the project was in fulfillment of his electioneering promise that all road projects embarked upon by the administration would be completed, adding that his administration has been injecting the sum of twelve billion Naira into Oyo’s economy every month as a result of prompt payment of workers’ salaries.

The governor reiterated that his administration has also begun efforts to fix internal roads, as it has released the sum of Seven Hundred and Fifty Million Naira (N750m) to the Oyo State Road Maintenance Agency (OYSROMA) for the rehabilitation of internal roads.

He said: “I want to appreciate the presence of everyone here today. “But, first of all, let me start by thanking my brother, the Executive Governor of Ekiti State, His Excellency, Dr. Kayode Fayemi, for joining us today as we commission the General Gas Flyover and the dualisation of the 7.2 Km Idi Ape-Basorun-Akobo-Odogbo Barracks Road.

“Your presence here communicates a message to those who think that politics is a do-or-die affair and for those who think collaboration across party lines for development is not possible.

“You have always said to me privately that we are partners when it comes to the issue of development of our people. Yes, our great party, the Peoples Democratic Party (PDP) and the All Progressives Congress (APC), have different philosophies. “But when it is time to do what is right for the progress of our people, we should be able to come together and get it done. And today, it is a testimony.

“Like I always say, players will always come and go but our state and country will remain. So, we welcome you to Oyo State. We know you are one of us and we can rightly call you an Ibadan boy since you were born here and grew up here. So, welcome home.

“When we came into government, we promised you, the good people of Oyo State, that every road project we embark on would target our economy. Our slogan has always been ‘where road goes, development follows.’

“The construction of the General Gas Flyover and the dualisation of the 7.2 km Idi Ape-Basorun-Akobo-Odogbo Barracks Road, has brought a new level of development to, at least, four local government areas – Ibadan North, Ibadan North East Lagelu Local Government Areas and Akinyele LGA.

“If you have any doubts that road construction directly contributes to economic development, then you can use the Idi Ape-Basorun-Akobo-Odogbo Barracks Road as a case study. People who have lived here for four years and above will tell you that the level of economic activity that has been extended to this zone in the past year. They will be able to do a comparative analysis, or as we say in local parlance, a “before and after.” So, I can say with all confidence, that this is another promise kept.

“Well, some people will say there are other roads that need repairs; that some roads in Ibadan need rehabilitation. Yes, we are aware of the state of roads, not just in Ibadan but the whole of Oyo State. And as we have promised, governance will continue to the last day of the life of this administration. So, we are already doing something about inner city roads.

“Earlier in the week, we gave the Oyo State Road Maintenance Agency (OYSROMA) N750 Million for the rehabilitation of roads. “The plan is to ensure that all LGAs get some of their roads fixed. The chairmen are here and we are collaborating together. This is a federal road but the people plying here are local people. So, I believe the three tiers of government have to work together to deliver dividends of democracy to our people. It is just that simple.

“Let me quickly address again an issue that keeps coming up in conversation. There is this idea that the State Government has hijacked Local Government functions. “Well, let me repeat that we have not in any way hijacked the functions of any local government. “We are only putting in the work needed to assist them in their functions.

“We all know the economic realities in our country right now and this has often led to people having to make tough decisions. “Sometimes, looking at the money in your pocket, you may decide, “meat is not my problem tonight, let me buy bread.” It is this same decision that governments at all levels need to make. For example,we ask ourselves if we should pay salaries or use the money to build roads because the money is simply not enough to do both.

“But here in Oyo State, we decided to make that decision easier for the LGAs. We tell them to go ahead and pay salaries – which stimulate the economy – we will assist you in doing other things that you should be doing. Yes, they are paying salaries and, at the state level, we are also helping them to do other things like waste management, which should have been a local government issue but we are taking it up at the state level.”

He added that while the local governments pay about N5bn as salaries every month, the state pays about N7bn.

According to him, it means that the sum of N12 billion is being injected into the Oyo State every four weeks.

Governor Makinde also told the gathering that though the contractor who was initially awarded the contract by the previous administration was owing the state the sum of N250 million, the state would recover the amount.