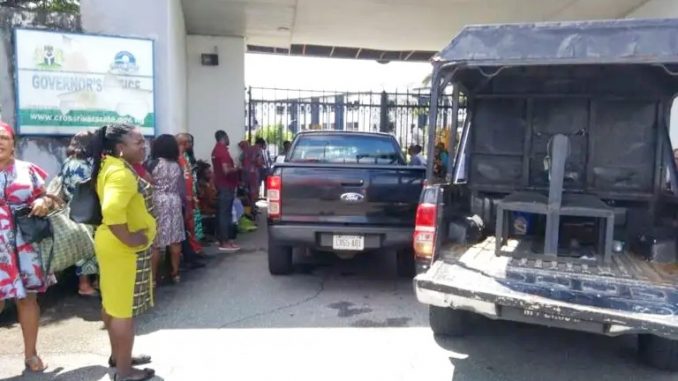 According to reports, governor Ayade, who arrived at work before 8 a.m., gave the Chief Security Officer, CSO, the order to lock the governor’s office gate and prevent anyone arriving after 8 a.m. from entering the building.

Around 10:45 am, 100 civil servants were stuck at the gate, according to the governor’s office, while some were observed leaving.

The governor was astonished to see that many of the government servants weren’t on their seats when he stepped in, according to a source who asked to remain anonymous and was quoted by Vanguard.

The source stated that he instantly ordered the time book to resume and directed the chief security officer to seal the gate to prevent anyone from entering after that.

Findings showed that those who were locked out included a variety of cadres of employees, including the highest ranking state civil service officer as well as political appointees like special advisers.

When contacted, Mr. Christian Ita, Special Adviser to the Governor on Media & Publicity, stated that the governor had always loathed any type of indiscipline and had also rewarded those who were dedicated to their jobs.

“The normal resumption time is 8am,” he said. “Why can’t others be present at that time if a governor can be in office at that time?”

“The governor has always rewarded and punished employees; he doesn’t think twice to punish you when you commit a mistake and to praise you when you are devoted to your work,” he said.

Several locked-out employees were seen hanging out at the state government building’s entrance gate as others headed toward Chieftaincy matters as of the time this report was filed.