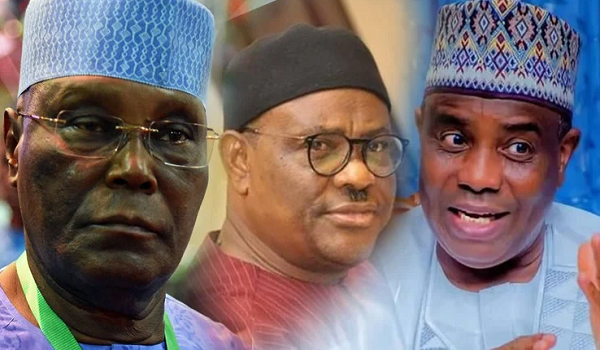 Peoples Democratic Party (PDP) presidential candidate, Atiku Abubakar, Sokoto State Governor Aminu Tambuwal and the party have asked the Federal High Court in Abuja to either strike out or dismiss a suit by Rivers State Governor, Nyesom Wike and a chieftain of the party, Michael Ekamon.

Wike and Ekamon are praying the court to void Atiku’s nomination and to substitute him with the Rivers governor, who came second in the presidential primary.
In their joint notice of preliminary objection, Atiku, Tambuwal and the PDP are contending that the suit, numbered FHC/ABJ/CS/782/2022, is incompetent and out to be rejected by the court.

They stated: “The instant suit as filed is unknown to law and/or not cognisable under a pre-election matter.
“The first applicant (Ekamon), having not participated in the primary election conducted by the National Executive Committee of the first respondent (PDP) lacks the requisite locus standi (legal right) to institute this suit.

“The instant suit, as brought by the applicants, does not fall within the purview of Section 84 of the Electoral Act, as such does not qualify as a pre-election dispute.
“The instant suit was not initiated by due process of the law.”

Justice Ahmed Mohammed granted the motion by Atiku, Tambuwal and the PDP for an extension of time within which to file all relevant processes in response to the suit and to deem all that have been filed as properly filed.
The motion was moved by their lawyer, Priscilla Ejeh, without objection from the plaintiffs’ lawyer, Winifred Okoi.

The Independent National Electoral Commission (INEC) listed as the second defendant was not represented and was said not to have filed any process yet.
Justice Mohammed has adjourned till September 14 for a hearing.
The plaintiffs, in their originating summons, raised eight questions for the court’s determination, among which includes whether the purported transfer of Tambuwal’s votes to Atiku by the PDP was illegal and void.

The plaintiffs want the court to determine if Tambuwal lost his claim to votes the moment he stepped down for Atiku.

They are praying the court for, among others, a declaration that the purported transfer of Tambuwal’s votes to Atiku be declared null and void.

The plaintiffs are also seeking a declaration that the PDP acted negligently and in bad faith by assigning the Sokoto governor’s votes to Atiku at the primary.
They prayed the court to “cancel the transfer of votes and a corresponding order restraining the third respondent (Tambuwal’s) withdrawal in the primary was done after voting had commenced.”

The applicants also prayed the court to declare that the PDP and Atiku took undue advantage of Tambuwal’s withdrawal when they allowed the Sokoto governor to persuade delegates to vote for the former Vice President in the primary.

They asked the court to order INEC to reject or remove Atiku from “its list of candidates in the 2023 presidential election.”

They are also seeking an order commanding the PDP to recount the votes of the primary that was held on May 28 and May 29.

Ekamon, in a supporting affidavit, stated that he was a member of the PDP and attested to the fact that Wike won the presidential election.

“The first and fourth respondents (PDP and Atiku)  who also wanted the votes desperately agreed and assigned the third respondent’s (Tambuwal’s) votes to the fourth respondent (Atiku) and increased his votes to defeat the second applicant (Wike).

“The second applicant won the primary if the votes of the third respondent (Tambuwal) had not been transferred or assigned to the fourth respondent (Atiku).”