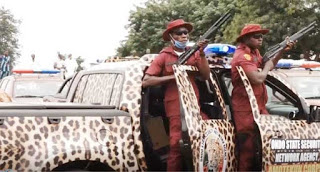 Amotekun Security Corps in Ekiti State has arrested seven persons including two women for various criminal offences such as burglary and armed robbery.

While addressing newsmen in Ado Ekiti, the commandant of the local security outfit in Ekiti State, Mr Joe Komolafe explained that the suspects were caught in Ara, Aisegba, and Ado Ekiti.

The commandant has said the suspects were apprehended following a tip-off by members of the communities.

The Ekiti Amotekun boss explained that two of them specialise in robbing motorists along Iluomoba- Aisegba road, while the remaining four were specialised in snatching motorcycles.

The commandant, who said the suspects would be handed over to security agents for prosecution, said two of them were ex-convicts.

Mr Komolafe appealed to residents of the state to report any suspicious movement in their areas to security agents for prompt action.

During the interview, the suspects admitted that they committed the offence.

Items recovered from them are four motorcycles, 16 phones, mask, knives, water pumping machine, among others.