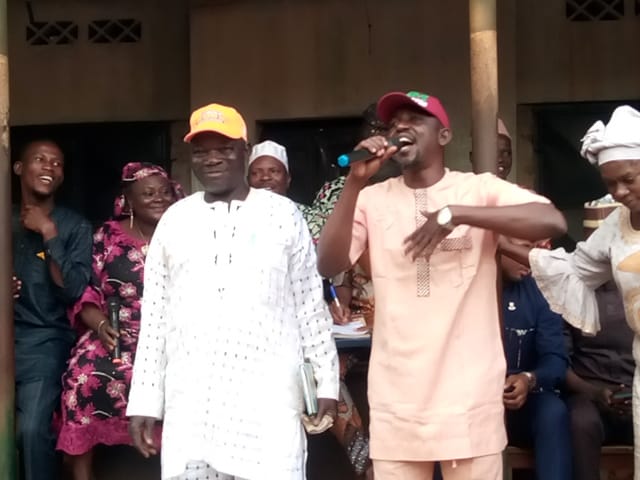 A Chieftain of the ruling People’s Democratic Party in Oyo state and the State Publicity Secretary of party, Engr Akeem Olatunji II yesterday put smiles on the faces of party members in Oluyole local government.

Olatunji empowered party members in ward 4 area of Oluyole local government with cash gifts as part of motivational package to propel party faithfuls towards giving unflinching support and commitment to party activities in the area.

The ruling party state Publicity Secretary in Oyo state also empowered one member who was said to be having challenges with his private business due to lack of power supply with a brand new power generator to help his business get back on track.

Oyo PDP Publicity Secretary, Akeem Olatunji being received with a rousing welcome at ward 4 yesterday.
Recall that Olatunji recently empowered PDP members in Oluyole with cash gifts to ensure they have adequate sense of belonging in the affairs of the party and government.

Excitedly, the beneficiaries drawn from all the political zones in ward 4 numbering six in total got 5,000 each (five thousand naira) expressed appreciation to Olatunji for always showing care and passion for the wellbeing of party members in Oluyole local government.

They said such traits are only attributable to Governor Makinde’s love and passion for the masses stressing that Olatunji’s style of leadership and approach to politics should be emulated by others for the greater good of the party.

In his brief remarks during the ward meeting held yesterday in Oluyole, Olatunji said momentum has continued to gathered in favor of PDP following the sterling performance of Seyi Makinde in the last three years.

Commending PDP leaders and members in ward 4, Olatunji stressed that if PDP in Oyo state continues to remain genuinely united, shunning all forms of selfish political interests, the forthcoming 2023 general election in the state would be PDP contesting against itself across all seats.

He made this remarks to underscore his position that PDP has no serious opposition party to contest against because the standard of governance raised by Governor Seyi Makinde has exposed the people to genuinely purposeful leadership.

The party’s Spokesman however, assured that if hands remain on deck by all party faithfuls, PDP will continue to harvest opposition party members into its fold until election day saying Governor Makinde’s victory as well as Chief Oyebisi Ilaka, Hon Mojeed Olawale Mogbonjubola Jagaban, Alh Hon Waheed Akintayo Ilumoka and all other PDP candidates ahead of 2023 is a must win and should be a top on the list of priorities of all party members in the state.

Earlier, Alhaji Waheed Akintayo popularly known as ‘Ilumoka presenter’ also returned officially to his political base in ward 4 to be reunited with other party faithfuls during the party’s ward meeting on Sunday.

In his brief address, the ace radio broadcaster turned politician as part of efforts to unite any aggrieved person at the ward for any reason that may be in connection to the party’s primaries, prostrated on the floor to appeal for peace and unity.

He stressed that PDP has become a beautiful bride in the state following Governor Makinde’s success in office within a short period transforming the state into a global investment destination and also improving the standard of living and quality of life of the masses.

Alhaji Akintayo who is the PDP Oyo state House of Assembly candidate for Oluyole state Constituency said 2023 election was almost looking like an easy ride with all the success stories of the Governor Seyi Makinde led PDP government but noted that such opportunity could be threatened if party faithfuls place personal interest above the overall interest of the party.

Alhaji Akintayo, who alongside Akeem Olatunji were received with a rousing welcome donated the sum of 50,000 (fifty thousand naira) cash to ward 4 as part of support mechanism to the party at the grassroot assuring that he will ensure adequate and qualitative representation at the legislative chamber of elected.

The ward 4 chairman of the party, Alhaji Moshood Adeniyi, while commending the duo of Olatunji and the House of Assembly candidate, Alhaji Akintayo for their commitments and gestures.

He assured that ward 4 remains united and will translate the unity into election victory come 2023 while appealing to party members to eschew personal interests that may stand as a clog in the wheel of the party’s progress particularly as it prepares ahead of the 2023 elections.

Highlight of the meeting was the defection of All Progressives Congress (APC) members in ward 4 into the PDP who expressed their joy and confidence in what they described as the winning team in Oluyole local government.