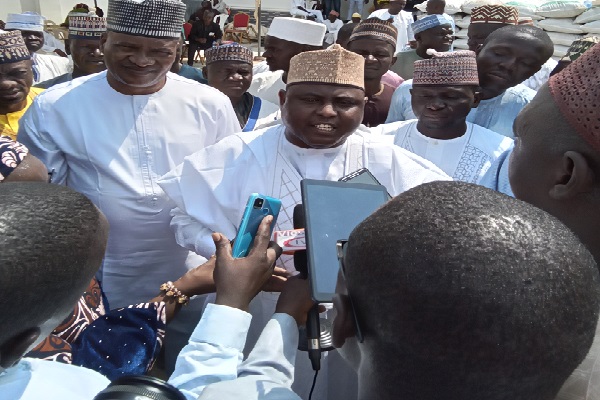 Leaders and members of the All Progressives Congress (APC) in Adamawa State have declared support for the party’s presidential candidate Asiwaju Bola Ahmed Tinubu and his running mate Senator Kasheem Shetitima despite campaign against the joint ticket by some prominent members in the State.

But Adamawa APC rooted for the party despite the fact that Atiku Abubakar, who is the presidential candidate of Peoples Democratic Party (PDP), is from Adamawa State.

This was made evident on Tuesday in the southern zone of the State where Atiku hails from, when the House of Representatives member for Mayo-Belwa/Jada/Ganye/Toungo Federal Constituency, Abdulrazak Namdas visited his hometown, Ganye.

Atiku is from Jada, which shares borders with Ganye. The two towns with Toungo belong to the same Ganye Kingdom.

Namdas, who was in Ganye to flag off the distribution of fertilisers to farmers in the four local government areas of his constituency, fielded questions from newsmen, including what should be the attitude of especially Christians to the Muslim-Muslim ticket of the APC.

Namdas asked his people to vote for Tinubu because it is the quality that he and his running mate represent that should matter to Nigerians.

“I appeal to Christians to support the Tinubu/Shettima ticket because the ticket is not meant to spite or discriminate against Christians,” he said.

Namdas, who contested for the Adamawa governorship ticket of the APC but lost, asked his people to put his loss behind them as he has accepted it in good faith, and vote for the winner, Senator Aisha Ahmed Binani.

Namdas made all the remarks to wild acclaim of his supporters who thronged the venue of the fertilizer distribution flag-off in Ganye, all of them chanting, ‘It’s Tinubu/Shettima at the federal level and Binani in Adamawa.’

Performing the flag off ceremony of distribution of 3,000 bags of fertilizers to his constituents, Namdas specified that the fertilizer will be distributed across the four local government areas of Mayo-Belwa, Ganye, Jada and Toungo for the current farming season.