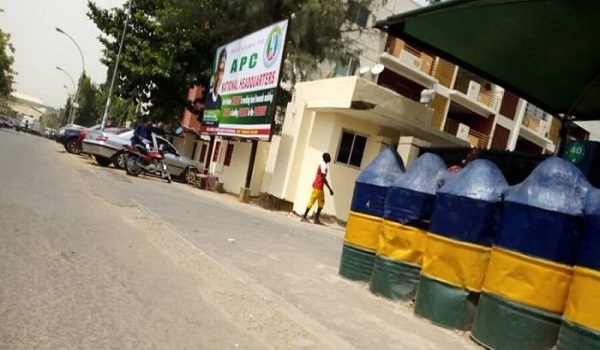 Protests rocked the National Secretariat of the ruling All Progressives Congress (APC) ahead of Friday’s deadline for submission of candidates to the Independent National Electoral Commission (INEC).

Some aggrieved candidates and their supporters stormed the party headquarters over alleged moves to substitute their names.

Around 5:30 pm youths from Kogi State almost overpowered security men at the gate before the intervention of officials of the Department of State Security Services and armed policemen.

The youths, who came in large numbers, vowed to prevent the national chairman of the APC, Senator Abdullahi Adamu from leaving the party national secretariat unless he addressed them.

It took the detailed officers attached to the chairman’s office time to pave way for him to leave at the close of work.

It was also gathered that five of the House of Representatives candidates stormed the party office to protest alleged sharp practice by some party leaders in the State and a member of the National Working Committee (NWC) to deny them their hard-earned tickets.

The candidates, who won primaries in Enugu, alleged leaders in the State and a National officer from the South East denied them necessary forms to fill ahead of the deadline for submission of candidates.

Speaking on behalf of other affected candidates, Honourable Ejike Okolo, told journalists that they were denied access to the INEC form mandatory for candidates to fill, instead, they were asked to fill Withdrawal Concession Form which they rejected.

He said:” We were invited through an SMS , to come to Abuja to collect and fill INEC form, only to be given withdrawal form which we rejected. They have since refused to give us the INEC Form.”

Ejike further alleged the party leaders were planning to give their tickets to favoured candidates who did not contest the primary with them.

It was reliably gathered that similar protests were staged by party faithful from Abia, Imo and Ondo statyes.