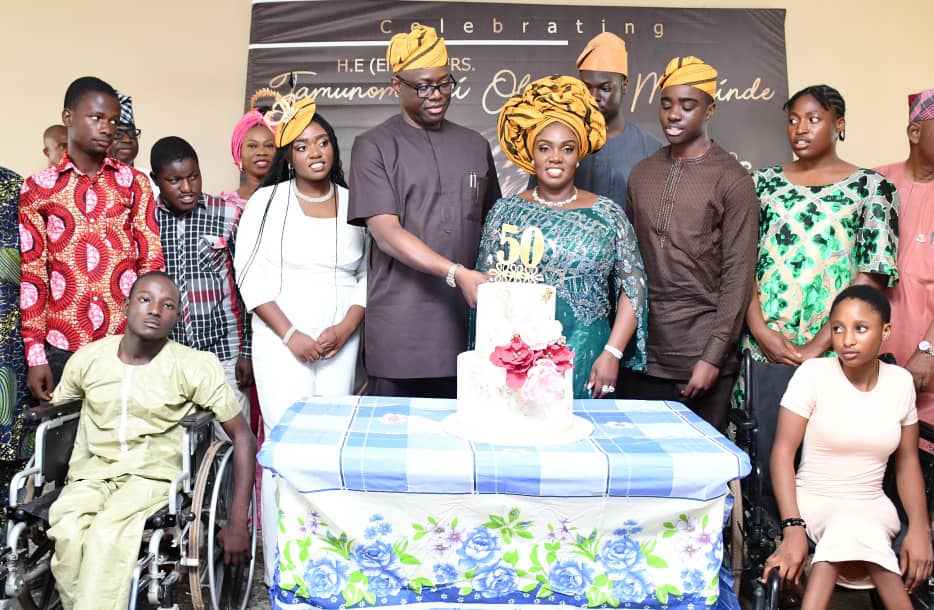 Wife of the governor of Oyo State, Engr. Tamunominini Olufunke Makinde, on Thursday, expressed joy and gratitude to God for not just being alive to witness 50 years on earth but also for fulfilling her dreams in life.

Mrs. Makinde stated this while celebrating her 50th birthday with motherless babies at the Oluyole Cheshire Home, The Polytechnic Ibadan road, Ibadan, noting that she is grateful to God for being alive.

The first family in the state and well-wishers including family members, top government functionaries, political associates and other dignitaries had earlier converged on the St Peter’s Cathedral, Aremo, Ibadan, for a birthday thanksgiving service.

A statement by the Chief Press Secretary to the governor, Mr. Taiwo Adisa, indicated that Mrs. Makinde, while speaking at the Motherless Home, said: “Today, I am so happy. I am 50 and grateful to God that I am alive. There were so many cousins, nephews, friends and sisters that are about my age but did not see today.”

She used the opportunity to appreciate Governor Makinde, who she described as a loving husband and sweetheart, for being there for her always.

Mrs. Makinde maintained that the purpose of her choosing to celebrate the day at the motherless home was to bless the babies and give a token to appreciate God in her life.

In her words: “I am not just alive but I feel fulfilled. God gave me a loving husband, our own governor, and my sweetheart. I say thank you to you.

“I still remember the statement my husband made before we got married. He did not ask me to be his girlfriend but to marry him. He told me then that if I did not marry him, posterity would not forgive me. “When I think of the word ‘posterity’ he used, I think you ( motherless children) are the posterity he was talking about.

“I want to thank God for being here today to be part of that history he never knew, even though he was saying it, and I decided to come to this home; to bless you with my time and a little token to say I appreciate God for knowing you and everyone in my life.

“I want to also say thank you to my husband, who is the governor of the state, and all government functionaries. “For everyone who has made me smile today, I thank you all.”

Speaking earlier at the thanksgiving service at the St Peter’s Cathedral, the Bishop of Ibadan Anglican Diocese, Most Rev. Joseph Akinfenwa, called on Christians to ponder on their past in order to maximise their future.

Bishop Akinfenwa admonished the celebrant to ponder on the 50 years she has spent on earth and prepare for the coming years.

He described Mrs. Makinde as a God-fearing and intelligent woman, who has been so supportive of her husband, adding that one asset a politician can be proud of is a loyal wife.

While commending Governor Makinde for fulfilling promises made to the people by paying workers’ salaries, and pensions as and when due amid other developmental programmes and policies, Rev. Akinfenwa used the occasion to call on the Federal Government to find a lasting solution to the insecurity in the country.

The church service featured programmes such as a special prayer for the governor’s family, the state, and the nation at large.

Dignitaries in attendance included a former governor of Oyo State and Osi Olubadan, Senator Rashidi Ladoja and his wife, Alhaja Mutiat ladoja; former Speaker of the Oyo State House of Assembly, Senator Monsurat Sunmonu, some members of the state executive council, political appointees and other well-wishers.