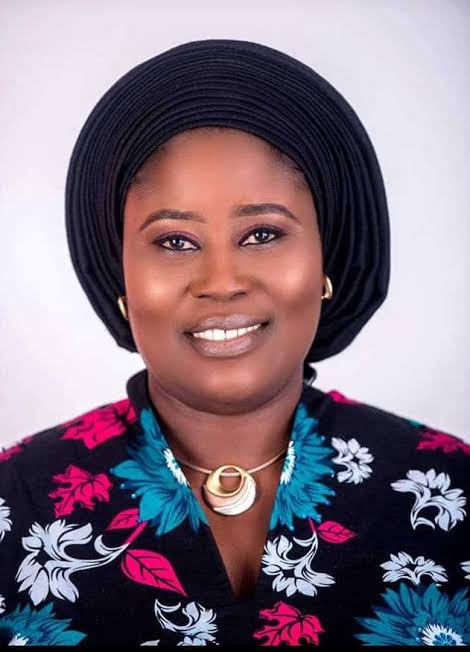 This electric power transformer donated by the lawmaker, journalists gathered, was part of series of other community support projects executed by the two term lawmaker who is the only female in the 9th Oyo Assembly.

Addressing journalists at the project commissioning on Monday April 3 at the Old NTC Quarters Area, Irewolede area of Ogbomoso North, Hon. Oladeji who doubles as the Chairman, House Committee on Women Affairs and Social Inclusion expressed her joy over the project.

She said the 500KVA power transformer will henceforth serve residents of the community comfortably for domestic consumption as well as enhance the security of the area.

In her words, “To the glory of God, I facilitated this transformer to this community. I have done one to the other part of the quarters earlier but due to some reasons I had to get another one, which is this one we’re Commissioning today, for them.

“It is a beautiful thing to make electricity available to my people at Irewolede Community as part of the communities under my state constituency. And I’m of the view that they will make good and proper use of this transformer which has been handed over to them.

While advising members of her state constituency to continue to support her in order to be able to do more also said, “I also hope that this facility will be protected jealously by the people to avoid being tampered with by unscrupulous elements.

Speaking on some of the challenges facing the community which prompted the donation of the power transformer, Hon. Oladeji said although, the community was facing a number of challenges occasioned by lack of power supply, she however, expressed optimism that the new 500KVA transformer which has since started supplying electric power to the area will put an end to those challenges.

The son of former Oyo state Governor, late Otunba Adebayo Alao Akala, Honourable Olamiju Akala as well as community leaders and key political decision makers in Ogbomoso North who converged to witness the event commended the lawmaker for representing her people well and justifying the mandate given her by the people of Ogbomoso North.

Hon. Olamiju, who described Hon. Oladeji as his elder sister said he grew up knowing the lawmaker as a key member of the Akala political dynasty who has continued to make the people of Ogbomoso proud.

He commended the lawmaker’s gesture calling it purposeful and pragmatic representation. He added that the people of Ogbomoso North are lucky to have a lawmaker who has continued to prioritize her people’s wellbeing above all other interest assuring that his relationship with the lawmaker can only grow and wax stronger as he hopes to also benefits from her wealth of experience as a lawmaker.

Senator Brymo Yusuf, a Brigadier General (rtd) who spoke with newsmen laud the gesture by Hon. Oladeji describing her as a worthy ambassador of Ogbomoso North at the state legislative chambers.

“I am glad to be here to commission this 500KVA power transformer donated by our Honourable, Mrs. Wumi Oladeji, who is making us really proud at the state House of Assembly. This project means a lot to the people and it doesn’t need further explanation as you can see for yourselves because it has afforded us good and regular power supply in this community.” He said.

One of the community leaders and also a landlord in Irewolede Community, Alhaji Ojo Adegoke, who spoke in both Yoruba and English languages said the community suffered epileptic power supply for a long time until Honourable Oladeji stepped in to bring an end to the problem of power supply in the area with the donation of the transformer promising that the community is ready at any given time to reciprocate the laudable gesture.

In his remarks, Engr. Dayo Lawal, highlighted the immediate and long term benefits of the power transformer to include adequate supply of electricity for domestic consumption and security of lives and properties of residents in the community. He assured that as part of measures to ensure durable use and longevity of the facility, residents will provide adequate protection for the transformer to avoid being tampered with by unscrupulous individuals.

Other political bigwigs and leaders who witnessed the event include Engr. Dayo Lawal, Mallam A. K. Bello, Alhaji AbdulHamid Monsur Ayoade Ejide and others who prayed for the lawmaker to attain greater heights in her future political endeavor.