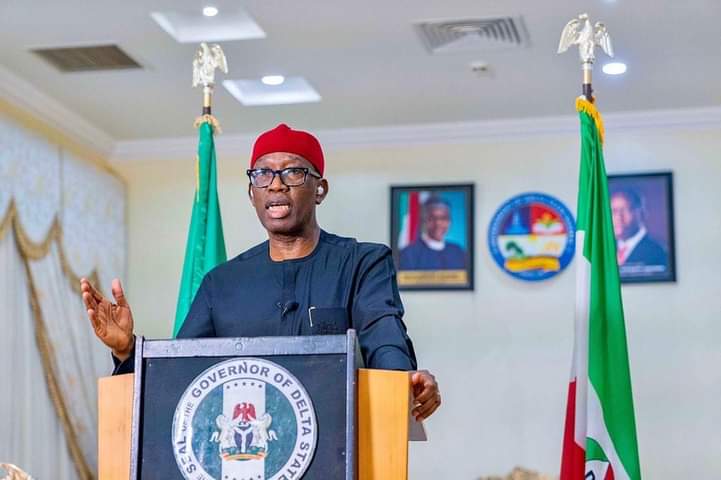 Stakeholders of the Delta State Peoples Democratic Party have accused Governor Ifeanyi Okowa of planning to impose some aspirants vying for various positions in the 2023 general election on the party’s delegates, during the forthcoming primary election slated for later this month.

The stakeholders alleged that the Governor had given a directive to all PDP delegates across the 25 Local Government Areas of the state, to ensure that the current Speaker of the State House of Assembly, Sheriff Oborevwori, who is a gubernatorial aspirant for the 2023 elections, emerges victorious during the primaries.

One of the party’s delegate who spoke to our Correspondent on Saturday in Asaba but pleaded anonymity, said they were being forced to support Sheriff Oborevwori governorship ambition because he is Okowa’s choice.

He said, “Our hands are tied at the moment. We cannot vote for a candidate of our choice because the Governor has given instruction that we should support Sheriff during the PDP governorship primary election.

“I know that the Governor is a good man because since he was first elected into office in 2015, he has been showing great commitment to the growth and development of the state and he has ensured stability in all sectors of the state’s economy but his tenure would be ending next year.

“He should give us the opportunity of choosing our next Governor among the PDP aspirants so that our dear Delta state can continue to enjoy the devidents of democracy beyond 2023.

“Governor Okowa should use his good office to ensure that all aspirants contesting for Governorship, Senate, House of Representatives and the State House of Assembly, have a level playing field to enable them test their popularity.

“Not allowing free and fair primaries is surely a way to impose candidates on the people. Let the governor give all delegates their democratic rights to choose candidates during the primary elections so that God Almighty can be happy with us because the voice of the people is the voice of God.”

In the same vein, residents of the state have lamented about the Governor’s decision to impose candidates in their various constituencies ahead of the primary elections of the Peoples Democratic Party.

Mr. John Nelly, a resident of Okpanam community in Oshimili North LGA, told our correspondent that the Governor might have given his support to one Mr. Frank Esenwah who is vying for the House of Assembly seat to represent the constituency in 2023.

Nelly said, “Almost everyone in Oshimili North Constituency is saying that Governor Okowa has given his support to Mr. Frank Esenwah who hails from Illah community to take over from Mrs. Pat Ajudua in 2023 at the State House of Assembly.

“So many of them are saying that the Governor has given instruction to PDP delegates to vote for Mr. Frank Esenwah during the primary election which is to hold soon.

“I don’t know how true their comments are, but if what they are saying is true, then the governor is not being fair to our constituency.

“I am particularly concerned about this matter because I so much love the Peoples Democratic Party and I have always voted for the party in all elections.

“Other supporters of the PDP in Oshimili North Constituency are also not happy with the situation. We love the party and we hope to continue supporting the party, so the right thing has to be done.

“We have aspirants who have everything it takes to represent Oshimili North constituency well at the Delta State House of Assembly. So, I don’t see any need why the governor should impose his preferred candidate on us.

“I would like to appeal to the governor to use his good office to ensure that all aspirants are given the opportunity to test their popularity. Because it is the only way we can get the best person to emerge as candidate of the party who all of us will support to emerge victorious during the general election in 2023.”

Another resident of the state, Goodnews Emeka who spoke on the matter, appealed to the Governor to allow justice to prevail during the forthcoming primary elections of the PDP in order to ensure that the party remains united beyond 2023.

“The reason why we are adding our voices to this matter is because we want PDP to remain in power. We do not want the party to fail as we approach 2023. So, the governor should do the needful and ensure that the forthcoming primary elections are free and fair”, Emeka said.