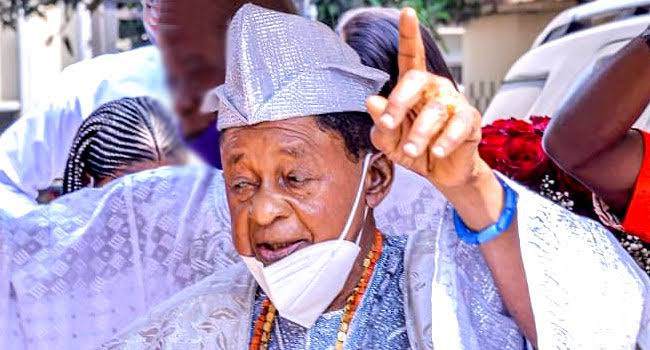 Contrary to several media reports, the remains of the late Alaafin of Oyo, Oba Lamidi Adeyemi have not been buried, The Nation can authoritatively report.

He is to be committed to mother earth by 9pm.

Many media outifts had reported the late monarch was buried shortly after the funeral prayer held in his palace.

But The Nation confirmed his corpse was only taken to the palace for safe-keeping pending burial.

He is to be interred in Bara, a five-minute drive from the palace.

A source said the culture of burying the Alaafin at Bara started in Oyo Igboho, where four Alaafins reigned.

Although, Islamic clerics and membes of the Muslim community in the afternoon prayes on the corpse, the remains were kept in the inner chamber of the palace afterwards.

The Nation observed the Islamic clerics, led by the Chief Imam of Oyo land, Sheikh Mos’ud Ajokidero and those from the Sarumi family, moved bathing materials into the Aganju forecourt where the body underwent Islamic ritual bath.

Alaafin’s first son, Prince Babatunde, and some of his siblings were said to have observed the bathing.

It was initially rumoured the late Alaafin would be interred at 4pm after the Islamic cleric offerred the Janazat prayer around noon.

But traditionalists, particularly Sango worshippers, were heard assuring mourners the usual traditional rites would take its course owing to the sacredness of the deceased monarch.

The remains, which were initially kept inside the inner chamber of the palace, were later brought to an open hall by the traditionalists apparently to convince all the remains had not been interred as rumoured.

The Nation observed the remains of the monarch were carried by many youths with braided hair, indicating they are Sango worshippers.

While women mostly dressed in red outfit sang dirge, many mourners were heard screaming the name of the deceased monarch with many others wailing uncontrollably.

The adherents, after putting the remains in an open wooden casket in full glare, ushered people out of the hall, saying the monarch would be interred by 9pm.The ceremony, they said, would be performed by traditionalists out of public view.

As of the time of filing this report, The Nation learnt they may be curfew around Oyo town though it has not been officially announced.A source, who advised visitors and residents to stay indoors, said nothing would stop the traditionalists from performing the rites for the monarch.

When The Nation moved round the massive palace, there was no place prepared as final resting place for the monarch.

One thought on “JUST IN: Alaafin not yet buried, interment likely 9pm”