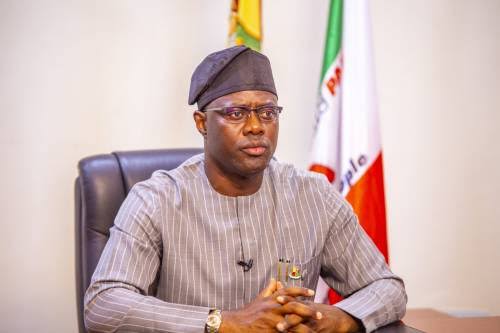 Oyo State Governor, Seyi Makinde, has insisted that he has no godfather. He says he belongs to Oyo State people.

Makinde, in a monitored programme on SplashFM, State Affairs with Edmund Obilo, in Ibadan, asserted that godfathers in the state were free to back whosoever they liked in 2023.

“The people of Oyo State own me, not a godfather,” Makinde asserted.

It would be recalled that a few days before the 2019 governorship election, former Governor Rashidi Ladoja led the candidates of the African Democratic Congress (ADC), Olufemi Lanlehin; Zenith Labour Party’s Sharafadeen Alli; Social Democratic Party’s Bolaji Ayorinde and others, to the Nigerian Union of Journalists (NUJ) Press Centre, Iyaganku, where they all submitted their ambitions for Makinde.

When the presenter prodded him to react to the alleged abandonment of party faithful levelled against him by a stalwart of the Peoples Democratic Party (PDP), Femi Babalola, Makinde admitted to making mistakes but insisted he had no deal with anybody prior to the 2019 governorship polls.

He said: “It irritates me when people allege I do honour the gentleman’s agreements. I have no deal with anyone.”

When asked to speak on allegations that he is a godfather and sole decider of who gets what in the PDP, Makinde referred the interviewer to the people who had “in the interest of the party, come for discussions and consultations.”