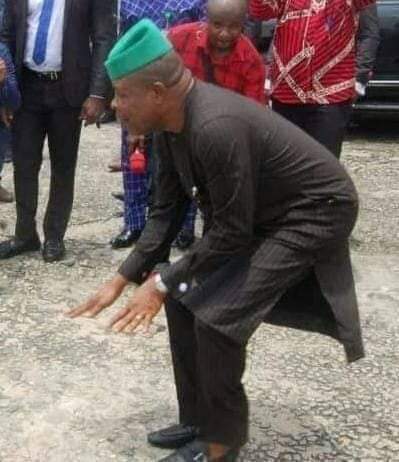 Disclaimer: The views expressed in this interview/article are the author’s own and do not necessarily represent the editorial policy.

In this piece, a public affairs analyst, Henry Emerekowe, compares the governance in Imo state under the administration of former governor Emeka Ihedioha and the incumbent Governor Hope Uzodinma.

Oxford English Dictionary defines the word “Rebuild” as “to reconstruct, reassemble, or build again, that which has been destroyed.” When the Emeka Ihedioha-led government was illegally sworn-in on May 29, 2019, he publicly declared that his government would be anchored on the mantra of “Rebuild Imo.”

Such declaration was a direct condemnation of the then immediate past government of Owelle Rochas Okorocha as having destroyed Imo state completely, necessitating the need to rebuild the state. But today, it is indeed alarming and unfortunate that evidences point to the fact that the same Ihedioha is discussing with Okorocha to join forces with him in the Peoples Democratic Party, PDP to further destroy Imo state.

Since the collapse of the Ihedioha administration and the emergence of Distinguished Senator Hope Uzodinma as the Executive Governor of Imo state, there has been a trend among the opposition in Imo state to deny the incumbent Governor any breathing space to govern, even if it means completely destroying the entire state.

Because of the personal, inordinate, selfish and “lunatic” ambition of one man to rule Imo state at all cost, the opposition has unleashed a vicious media war and cyber-terrorism against the state government, aimed at making the state ungovernable and destroying the state.

Every week, the opposition comes up with a barrage of lies and falsehood, in the process deceiving some of the gullible and unsuspecting members of the public. These merchants of lies have deployed so many anti-Imo strategies and actions to actualize their agenda. They hail and clap for unknown gunmen when they unleash bloody terror against innocent Imo citizens and destroy government property.

They applaud bank and other agencies when they lock their gates against customers, even when IPOB has publicly denied declaring any sit-at-home on Mondays. They join forces with tanker drivers to embark on strike over an independent marketer’s personal issue with the past government, thereby punishing the Imo citizens they claim to love, and destroying the economy of the state, just to propagate the selfish ambition of one man to rule Imo state at all costs. They even sabotage some of the laudable efforts of the government in provision of infrastructure, just for the ambition of this “one man”.

All over the world, opposition is rated based on their ability to proffer solutions to problems, where the incumbent is not doing well. This is the motivation that drives the electorate to vote for the opposition in future elections. Unfortunately in Imo state, the opposition is not interested in making the state better. The state which they claimed to have come to rebuild in 2019 is the same state they have now sworn to destroy, just because of the ambition of one man. What an irony? From merchants of lie, they have graduated to cyber-terrorists, as was clearly evident in the cloning of the front page of Friday 27th August, 2021 edition of THISDAY newspaper.

Opposition in Imo state has today been reduced to the selfish ambition of one man. What a shame? The pertinent question is: “should the people of Imo state allow the opposition to completely destroy the state in their agenda of propagating the selfish and lunatic ambition of “one man” to rule Imo state at all cost?” The answer is No!

All hands must therefore be on deck to ensure that Imo state is not destroyed on the altars of one man’s selfish ambition. Let us join hands to ensure the prosperity, security and betterment of our dear state because there is no other state we have but Imo state. The opposition should desist from acts that destroy the state, but they should join hands with government to build the Imo state of our dreams.