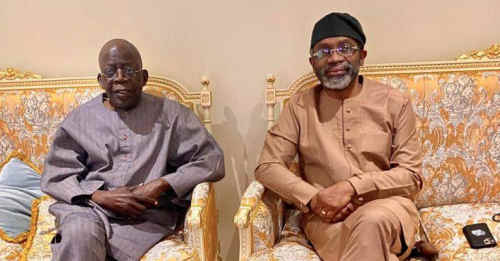 Bola Tinubu, the National Leader of the All Progressives Congress (APC) and former Governor of Lagos State, is raising more concerns among his supporters, as the multiple surgeries, he has undergone appear to have “badly affected” his hands.

Tinubu’s condition is currently so critical, according to SaharaReporters, that his two hands shake violently and he has to lean on his guests to pose for photographs. Political supporters and godsons of APC leader have continued to flock to London, United Kingdom, for a solidarity visit, with the Speaker of the House of Representatives, Femi Gbajabiamila, being the most recent.

Unlike when President Muhammadu Buhari visited mid-last month, the two were photographed sitting while Tinubu attempted to put away his walking stick.

Bola Tinubu Health Tinubu’s hands and legs are currently failing him, according to a close source close to the APC leader who spoke to SaharaReporters. “Tinubu is undergoing extensive physical therapy.

The hands are trembling violently. After several surgeries, both hands are severely affected. You’ll notice that when he takes photos, he leans on his guests or gets sandwiched to avoid having his hands in an embarrassing position,” he added.

On August 12, SaharaReporters reported that President Muhammadu Buhari visited Tinubu in London following his (Tinubu’s) second surgery. During Buhari’s visit, Tinubu was seen with a walking stick, confirming SaharaReporters’ report that he had knee surgery at the John Hopkins University Hospital in Maryland, US.

The APC leader, it was learned, left the US on crutches for the United Kingdom a few days after the surgery. According to SaharaReporters, Tinubu originally planned to have the surgery in Paris, France but changed his mind due to rumours of his death.

On July 31, SaharaReporters reported that Tinubu, who has made several medical trips this year alone, had surgery two weeks prior and could be billed for another. The APC National Leader has been absent from official and party functions in the country for some time, amid speculation that he is being groomed to succeed Buhari’s repressive regime in 2023.

“Tinubu is being treated in a hospital in Maryland, United States. His health is deteriorating. He was unable to attend the opening of his Arewa library, as well as the Local Government Area elections held last week.

Due to health issues, he was unable to attend today’s APC meeting. He had surgery last week, according to a reliable source who spoke to SaharaReporters at the time.

The two governors reportedly discussed, among other things, political events in the country, the clamour for the presidency of the South-West in 2023, and Tinubu’s emergence. Apart from Fayemi and Akeredolu, Tinubu’s godson, Lagos State Governor Babajide Sanwo-Olu, first paid him a visit in July.

Dr Muiz Banire, a former APC National Legal Adviser, also paid a visit to the former governor of Lagos to express solidarity with him and to wish him a speedy recovery.