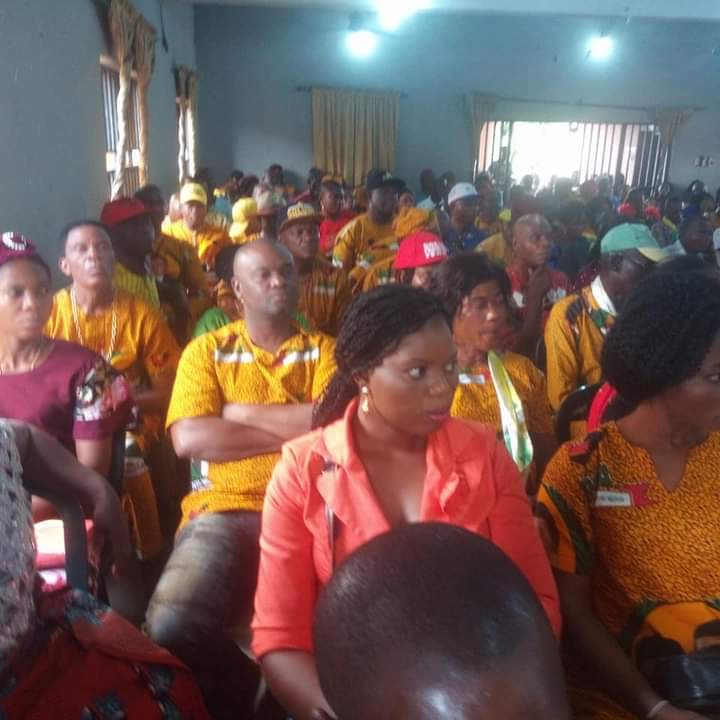 Inaugurating the Sub-committees at the Council’s hall, the Chairman of the Campaign Council, Hon Sir Tony One-Week Muonagor charged them to go all out and deliver their various mandate even as he enjoined the  subcommittees to ensure that they deliver APGA in their pooling units and wards.

According to Hon Muonagor, APGA Idemili North must work assiduously to ensure the emergence of Professor Chukwuma Charles Soludo (Dikeudo Isuofia) as the next governor of Anambra State. He paid a glowing tribute to the Executive Governor of Anambra State, His Excellency, Chief Willie Obiano (Akpokuedike Aguleri) for placing Anambra State on the Path of Progress.

In an interview, the Deputy Chairman of the Committee, Chief Tony Onyima, PhD (Ife Idemili) called on the newly inaugurated Sub-Committees members to take their duty seriously and also work within the stipulated terms of reference handed down to them by the leadership.

Chief Onyima admonished all to shun acts capable of undermining the entire process, saying that delivering APGA in Idemili was a collective responsibility.

In their separate speeches, the Secretary of the Campaign Council Committee, Hon (Amb.) Jeff Ubah and Co-Secretary, Hon Nnanna Nzewi and the Publicity Secretary of the Campaign Council Committee, Engr. Godwin O. Anyaegbunam appealed to the Subcommittees members to see and take the task before them as their personal fight, noting that they were carefully and highly selected and should bring their experience to bear in their various pooling booths and wards.

Speaking, the Chairman of Idemili North Tactical Committee and a former Deputy State Chairman of APGA as well BoT member of APGA, High Chief Ifeanyi Udokwu( Onowu Ogidi) appreciated the principal officers of the Campaign Council Committee for what they had done so far.

He  charged APGA members in Idemili North to be strategic in this their thinking and work for the greater good of the party, advising the teams to engaged in proactive politics as well as mobilise all and sundry towards delivering APGA in the election.

Addressing the gathering, the Special Adviser on Chieftaincy and Local Government Affairs, Hon (Barr.) Mrs VeraQueen Okonkwo pleaded with members to guard jealously and judiciously APGA, describing it as our collective identity. She expressed the hope that the party would emerged victorious come November 6, 2021.

For his part, the former House Reps Member in Idemili North and South and the Director General of the Contact and Mobilization APGA Campaign Organisation,

Hon Chief Ifeanyi Ibezim (Ochiagha Idemili) expressed satisfaction with the turnout of APGA members at the event and called for concerted efforts towards capturing all the Pooling Units and wards in Idemili North.  He reiterated his commitment towards working for APGA.

The inauguration of the Subcommittees teams Tagged “Idemili North APGA Victory Team” recorded a mammoth  crowd of APGA footsoldiers and sympathizers drawn from the 12 wards that make up Idemili North.

Inauguration of the Sub-Committees, sharing of APGA uniform, photographs, exchange of pleasantries formed the highpoints of the occasion.