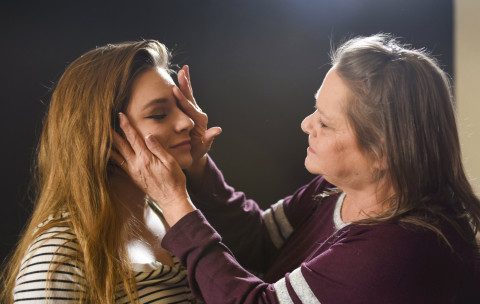 Connie Parke last saw her family’s faces over a decade ago – but now she can watch as her grandchildren play and finally knows what her adult daughter looks like.

When she started losing her vision and eventually went blind, she was told it was detached retinas or glaucoma.

But the diagnosis was wrong – she actually had cataracts, which could easily be removed to restore her sight.

Connie, from Aurora, Colorado, said: ‘People need to get rechecked because I was blind for 15 years probably for no reason.

‘The day the retina specialist told me he saw no diseased retinas, my husband and I instantly got upset.

‘I had a little resentment towards the doctors that couldn’t find anything wrong or told me all these things were wrong, but the God’s honest truth is the day they took the patch off my eye, and I could see, it took all that anger away.’

The problem started back in 2003 when Connie began noticing halos and prisms on lights while driving, which her doctor said was due to glaucoma.

‘Three weeks later, I had lost even more sight and peripheral vision,’ she said.

At that stage, she was told that as they couldn’t operate, she would eventually go blind.

Her vision loss accelerated and she could barely see anything after a few months.

‘I didn’t believe it until I started hurting myself,’ she said.

‘I was getting lost, falling down stairs, falling up stairs and setting myself and my house on fire.

In 2004, she relocated from Montana to Denver, Colorado in 2004 to attend a training centre for blind people.

She continued to enjoy her hobbies like ice skating, kayaking, camping and attending sporting events and concerts.

She said: ‘I just lived life as much as I possibly could the way I did before I lost my sight.’

But there were things that were harder for her to adjust to.

‘I wasn’t really sure to how to use a cane and I would keep walking into bushes,’ she said.

‘I had to have somebody with me when I cooked to make sure the food looked okay.

‘I couldn’t vacuum and had to sweep in a pattern.’

But in 2018, when she was referred to the UCHealth Sue Anschutz-Rodgers Eye Center, the ophthalmologist told her her diagnosis was wrong.

On November 12, she had the surgery to remove them on her right eye.

‘When they took my patch off the next day the first thing I saw was the nurse’s eyebrow, eyelashes and pupil and I started crying,’ Connie said.

‘I think the doctor was as surprised as me because he had made it perfectly clear he wasn’t promising me measurable vision.

‘I had the second eye done and right after Thanksgiving, I was seeing 20/20 out of both eyes.’

Now she is able to see again and her guide dog Talulah Mae has retired and become a pet, while Connie works as a unit clerk with UCHealth.

‘The eldest doesn’t look anything like she looked when she was three weeks old,’ Connie joked.

She also loves seeing the things around her grow and now realises how much people take those things for granted.

‘I got to watch all the flowers bud and the trees grow leaves,’ she said.

‘People think it’s tedious to watch grass grow, but when you haven’t seen a blade of grass in years, you watch the grass grow.’

But having now been able to see herself for 15 years, she had no idea what she looked like.

‘The hardest thing was looking in the mirror, because I never thought about myself ageing,’ she said.

‘I had no idea who that was looking back at me.’

Seeing her husband again after all this time, though, has been very special.

‘He’s still the most handsome man ever and I’m still completely in love with him,’ she said.

Now, she’s excited to retake the vacations the couple had been on when she was blind.

‘He took me to the Oregon coast, Yellowstone and all through the Rockies. Now I just want to go see it again,’ she said.