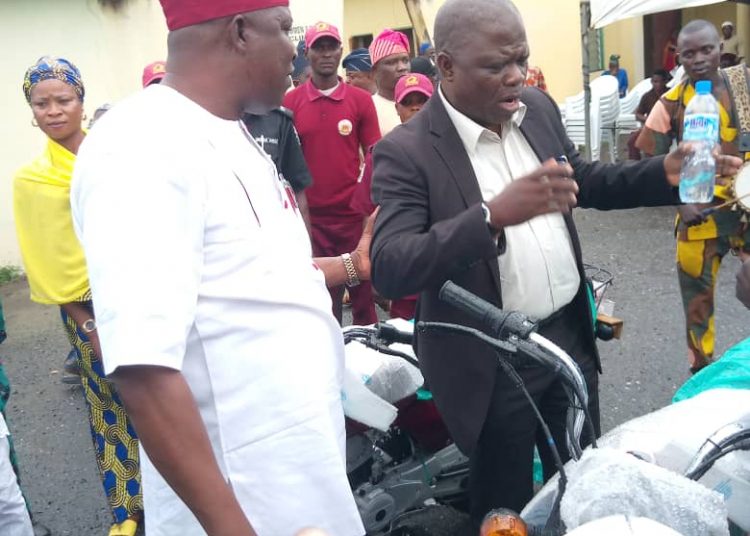 The Executive Chairman of Ibarapa East Local Government Area, Hon. Gbenga Obalowo, in a bid to join the state government in the fight against Insecurity, has equipped local security agents in the council with a number of motorcycles, cutlasses, security boots among others.

Obalowo, while addressing journalists over the weekend at the premises of the council, noted that the level of insecurity in Ibarapa land is alarming but will will be fought to a standstill.

He lamented that the people of Ibarapa cannot sleep with their two eyes closed or move freely from one town or villages to the other for the fear of being kidnapped.

Obalowo maintained that the step was taken to put a stop to the killings by criminal herdsmen.

In his words: “This nefarious activities increases day by day. We know the state government is doing its best and cannot do it all. That is why we are equipping the security agents to compliment the efforts of the present administration in Oyo State as being led by His Excellency, Engnr. Oluseyi Makinde to curb Criminality and rescue the people of grassroots from these dangerous people.

While saying that he cannot continue to fold his arms with the level of Insecurity in the locality, He further stated that the council will make provision for more equipment in the coming week.

“I want to believe all of these will go a long way to help us curb criminalities in Eruwa, Lanlate, and its environs. In the coming week, I want to assure that we will make provision for more. Enough is enough. I cannot continue to fold my arms.

He, however, urged the residents not to wait till they are attacked before raising alarm of any security threat in the neighborhood.

Present at the auspicious occasion were the Heads of Departments and their deputies of the HLGA, Alh.Wasiu Bolade Babalola, the Vice Chairman, traditional rulers, political leaders and all the security agents of the local government.